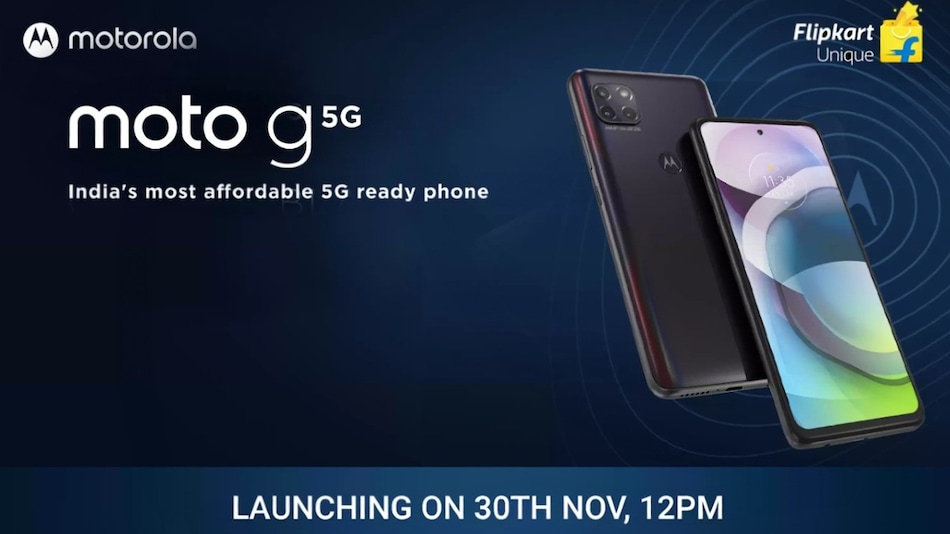 Motorola Moto G 5G will launch in India today, at 12pm (noon) on November 30. The Moto G9 Power, meanwhile, is expected to launch soon too — in the second week of December, according to a tipster. Moto G 5G and Moto G9 Power were launched in the European market earlier this month. Motorola refers to the Moto G 5G as “India's most affordable 5G smartphone.” The Moto G 5G will go on sale in India via Flipkart, and its expected price is believed to be roughly around Rs. 25,000.

The Lenovo owned company announced the India launch of the Motorola Moto G 5G via Twitter. The smartphone will be available on Flipkart on November 30, 12pm (noon) onwards. The Moto G 5G is powered by a Qualcomm Snapdragon 750G chip, has a 5,000mAh battery, and will likely come in a 4GB RAM + 64GB storage variant.

Motorola Moto G 5G was launched in Europe in a sole 4GB + 64GB storage configuration at EUR 299.99 (roughly Rs. 26,300). It is expected to be priced similarly in India or perhaps cheaper, since Motorola has been branding it as an affordable 5G smartphone. It is offered in Volcanic Grey, Frosted Silver colour options in Europe.

The Moto G9 Power, meanwhile, is priced in Europe at EUR 199 (roughly Rs. 17,500) for the 4GB + 128GB storage model. It is offered in Electric Violet and Metallic Sage colour options.

Coming to the camera, the smartphone has a triple rear camera setup featuring a 48-megapixel primary camera. It also has an 8-megapixel secondary wide-angle sensor and a 2-megapixel macro sensor. For video calls and selfies, the Moto G 5G has a 16-megapixel camera in the front.

The Motorola Moto G 5G packs a 5,000mAh battery with 20W TurboPower fast charging support. Connectivity options for the phone include 5G, NFC, Bluetooth 5.1, Wi-Fi 802.11ac, USB Type-C port, and GPS. The phone has a fingerprint sensor on the back.

In terms of optics, the Moto G9 Power has a triple camera setup with a 64-megapixel primary sensor, a 2-megapixel macro sensor, and a 2-megapixel depth sensor. It has a 16-megapixel camera at the front.