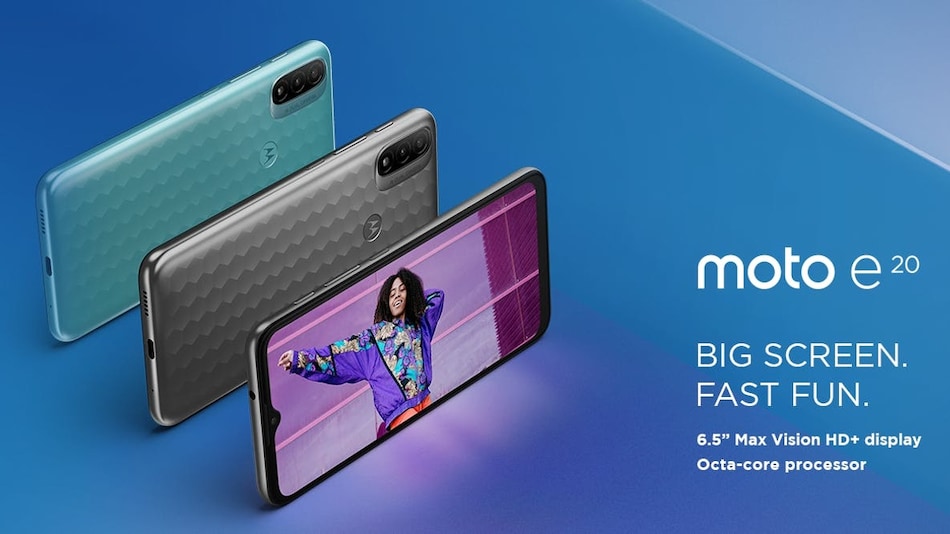 Motorola Moto E20 has been launched in Europe as the newest affordable model from the Lenovo-owned company. The new Motorola phone comes with a basic hardware that includes an HD+ display and a Unisoc SoC. The Motorola Moto E20 also carries a dual rear camera setup and runs on Android 11 Go Edition. In addition to the Moto E20, Motorola seems to be preparing for the launch of the Moto E40 as another phone in the Moto E series. The smartphone purportedly appeared on Geekbench along with some key specifications.

Motorola Moto E20 price has been set at EUR 99.99 (roughly Rs. 8,700) for the lone 2GB RAM + 32GB storage model. The phone comes in Coastal Blue and Graphite Gray colours and will initially be available for purchase in select countries in Europe.

Details about the India launch of the Motorola Moto E20 are not yet announced.

In terms of specifications, the Motorola Moto E20 runs on Android 11 (Go edition) and has a 6.5-inch MaxxVision HD+ (720x1,600 pixels) display with a 20:9 aspect ratio and a 60Hz refresh rate. The phone is powered by an octa-core Unisoc T606 SoC, along with 2GB of RAM. It features a dual rear camera setup that houses a 13-megapixel primary sensor with an f/2.2 lens and a 2-megapixel depth sensor. The Motorola Moto E20 also has a 5-megapixel selfie camera sensor at the front, with an f/2.2 lens.

Motorola has provided 32GB of onboard storage that supports expansion through a dedicated microSD card slot. Connectivity options include 4G, Wi-Fi, Bluetooth, GPS/ A-GPS, FM radio, USB Type-C, and a 3.5mm headphone jack. The phone also comes with a fingerprint sensor at the back and a dedicated button to activate Google Assistant. Further, the phone has an IP52 certification for dust and water resistance.

The Motorola Moto E20 packs a 4,000mAh battery with supports for 10W charging. The built-in battery is also claimed to deliver up to 40 hours of usage on a single charge. Besides, the phone measures 164.8x75.5x8.5mm and weighs 184 grams.

Benchmark site Geekbench has purportedly listed the Motorola Moto E40 along with some of its specifications. The site suggests that the phone runs on Android 11 and is powered by an octa-core Unisoc SoC. It also indicates that the Moto E40 may come with at least 4GB of RAM — 2GB more than the Moto E20.

The rumour mill has also suggested that the Motorola Moto E40 would come with 64GB of onboard storage and include a 5,000mAh battery with 10W charging, though the official details about the Moto E40 are yet to be revealed.