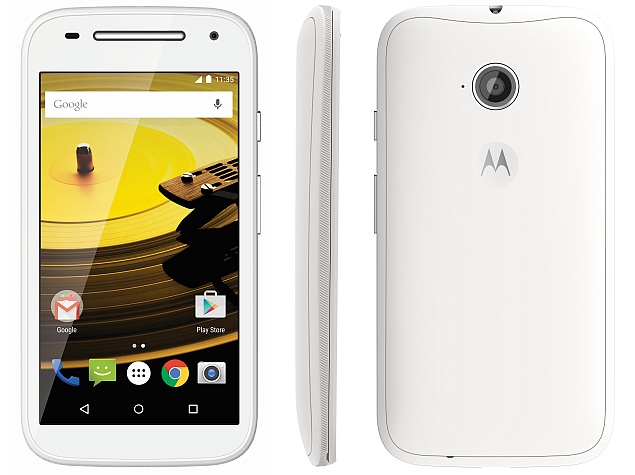 Lenovo-owned firm Motorola has launched its latest budget smartphone in India, the Motorola Moto E (Gen 2), priced at Rs. 6,999. The smartphone will be available available from midnight Wednesday via Flipkart - the firm's exclusive online retail partner.

Unfortunately, the company will not be launching the Motorola Moto E (Gen 2) 4G in India alongside the 3G-only variant, and said it will be made available 'soon' but did not specify a time-frame.

Unveiled at the end of February, the handsets offer several improvements over their predecessor the Motorola Moto E, including a larger display, battery, and twice the built-in storage. The first-generation smartphone will not be discontinued, and will continue to be sold at Rs. 5,999.

The Motorola Moto E (Gen 2) and its 4G LTE variant feature a 4.5-inch qHD (540x960 pixel) display with a pixel density of 245ppi, and Corning Gorilla Glass 3 protection along with anti-smudge coating. Both variants pack a 5-megapixel rear camera, and this time Motorola has included the much-lamented front camera onboard, in the form of a VGA (0.3-megapixel) sensor. The 8GB of built-in storage on both Moto E (Gen 2) handsets can be expanded via microSD card (up to 32GB).

Connectivity options on the Moto E (Gen 2) include Wi-Fi, Bluetooth 4.0LE, GPS/ A-GPS, GLONASS, FM radio, and Micro-USB. The handset measures 129.9x66.8x12.3mm, and weighs 145 grams. It is backed by a 2390mAh battery. Users can choose from a Black or White base colour, with a choice of interchangeable Motorola Bands (Golden Yellow, Turquoise, Blue, Raspberry, Purple, Red) and Grip Shells (Golden Yellow, Charcoal, Turquoise, Blue, Raspberry). The bands come in packs of three colours priced at Rs. 999, while Grip Shells will cost Rs. 999 each.