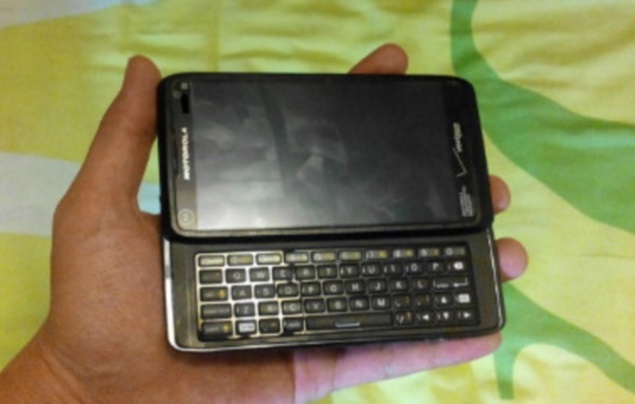 Motorola may not be making too many headlines these days, but the company has been working on expanding its Droid smartphone line-up with the Droid 5 if a rumour is believed.

The leak was first reported by New Cell Phones blog which notes that the specifications of the rumoured Motorola Droid 5 appeared on Chinese forum, Weibo.

The site claims that the Verizon-bound Motorola Droid 5 phone comes with a 5-row QWERTY keyboard, and features a 4.3-inch HD display. The site also notes that the Droid 5 is powered by a dual-core Snapdragon S4 Plus MSM8960 ARM processor with the Adreno 255 GPU, complemented by 1GB of RAM, and 16GB of ROM (with microSD card expandability).

The alleged Motorola Droid 5 is likely to support wireless charging and will support NFC, as per the site, which also notes that the Droid 5 will not sport shock, water and dust-resistance. No tentative availability details about the Droid 5 were mentioned.

The Google-owned handset maker has been allegedly gearing up to launch the next Droid phone that follows Droid's design aesthetics and features a 5-row slide out QWERTY keyboard for a while now. Earlier, the Droid 5 hit the rumour mill with purported images surfacing online.

The previously leaked Droid 5 images purportedly revealed that its front panel will not house any physical button and that the rear panel will include the camera alongside flash. The Verizon 4G LTE logos on the front panel also suggest that the device will head to the US carrier.