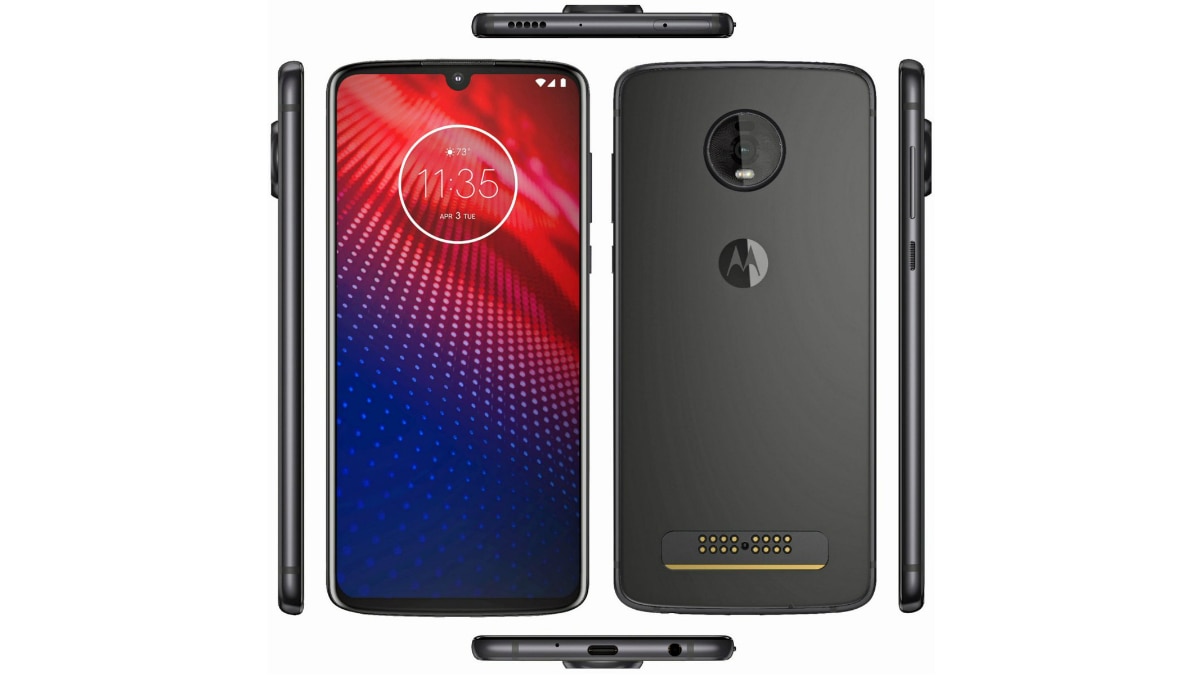 Moto Z4 in a leaked render shown from all angles

Motorola's (yet to be announced) newest flagships, the Moto Z4 and the Moto Z4 Force, have been in the rumour mill for quite some time now. And while there is no information regarding the release date yet, the phones have leaked over the Internet revealing the handsets from all sides. Additionally, along with the key specifications of both the smartphones, the tipster who goes by the Twitter handle @HeyAndri has also mentioned the prices of the flagship smartphones.

According to the tipster, the Moto Z4 will be sporting a 6.4-inch full-HD+ OLED display along with an in-display fingerprint scanner. The smartphone will be powered by the Qualcomm Snapdragon 675 SoC processor along with 6GB RAM and 128GB of inbuilt storage. The battery capacity is set at 3,632mAh. As seen in the render, there's a single 48-megapixel rear 'Smart AI' camera with f/1.6 aperture and a 24.8-megapixel camera with f/1.9 aperture for selfie needs. The Moto Z4 will come with support for Moto Mods and as for the pricing; it will be set at $399 (roughly Rs. 27,640).

Now coming over to the Moto Z4 Force. The leak suggests that this one will look the same as the regular Moto Z4 on the outside as the changes are mostly made on the inside. The smartphone will be powered by the Qualcomm Snapdragon 855 processor alongside 8GB RAM and 128GB of in-built storage. There's an in-display fingerprint sensor on this one as well. The battery is actually smaller than the Moto Z4 at just 3,230mAh. But the Moto Z4 Force makes up for the lost ground in the camera department over its regular sibling. There's a triple rear camera set up at the back that comprises of a 48-megapixel f/1.6 aperture primary lens along with a 13-megapixel f/1.8 aperture secondary lens paired with an 8-megapixel f/2.0 aperture telephone lens. The selfie shooter remains the same just like the Moto Z4. The Moto Z4 Force will be priced at $650 (roughly Rs. 45,030).

Just last month we had reported about the key specifications of the Moto Z4. And here we are today, with more details on not just the Moto Z4 but the Moto Z4 Force as well. Lastly, as we mentioned earlier that despite the leaks there's still no official word from Motorola on the release and availability of both the smartphones.