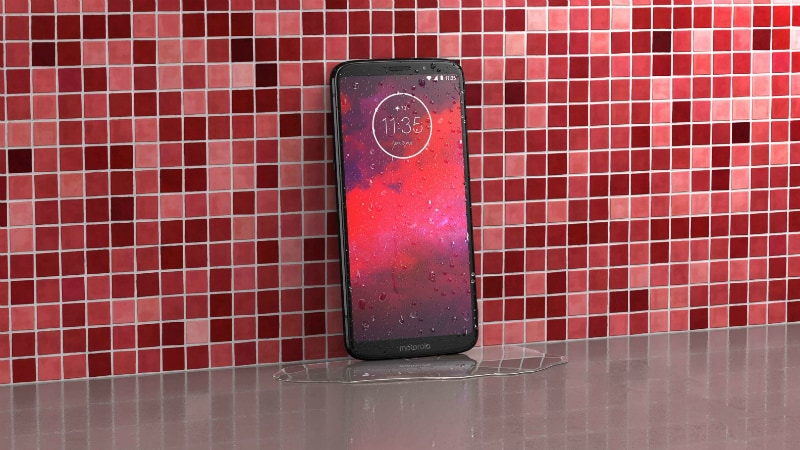 Moto Z3 has debuted with a 6.01-inch full-HD+ AMOLED display and an optional 5G Moto Mod.

Moto Z3 was launched on Thursday at an event in Chicago, the company's headquarters. The new smartphone, which sits above the Moto Z3 Play that debuted in June, comes with a splash-resistant build and delivers a pure Android experience. It also continues the Moto Z-Series legacy of supporting Moto Mods through a dedicated pogo-pin connector at the back. Lenovo-owned Motorola has additionally partnered with Qualcomm to launch a 5G Moto Mod that will enable the next-generation network access on the Moto Z3. The 5G Moto Mod uses a Snapdragon X50 modem and "millimeter wave components" to offer 5G access on Verizon network. Alongside announcing the launch of the Moto Z3, the company has revealed that it has no plans to bring the anticipated Moto Z3 Force. The smartphone was well expected as the successor to the Moto Z2 Force and the company's next-generation flagship. However, it eventually confirmed that no more Moto Z-Series models will debut this year. This means, unlike the last year Moto Z family that included the Moto Z2 Force and Moto Z2 Play, there will be the Moto Z3 and Moto Z3 Play this year.

The Moto Z3 price in the US has been set at $480 (approximately Rs. 33,000). The smartphone will go on sale exclusively through Verizon in Ceramic Black colour option starting August 16. Customers in the US will also be able to get a carrier-locked version of the Moto Z3 at a monthly charge of $20 for 24 months. Motorola hasn't revealed the price of the 5G Moto Mod, though it has confirmed that the new offering will be exclusive to the US in early 2019.

Similar to the Moto Z3 Play, the Moto Z3 has One Button Nav that offers an iPhone X-like experience. The navigation button, which is inspired by the navigation experience coming on Android P, allows users to swipe left to go back, right to access recent apps, and tap to go home. The handset also a side-facing fingerprint sensor - embedded on the right. Further, it bears a water-repellent P2i coating that is touted to protect from spills and splashes on top of 6000 series polished aluminium frame. The smartphone also has Moto Actions to let users access features such as camera and flash using gestures. Besides, there is a Moto Display feature to preview notifications at a glance.

Motorola has also brought the 5G Moto Mod that is designed to deliver a next-generation experience on the Moto Z3. However, the Mod is exclusive to Verizon's 5G network.

The Moto Z3 runs Android 8.1 Oreo, upgradable to Android P, and features a 6-inch full-HD+ (1080x2160 pixels) AMOLED display along with a Max Vision 18:9 aspect ratio and a 2.5D Corning Gorilla Glass protection. Under the hood, there is an octa-core Qualcomm Snapdragon 835 SoC, coupled with 4GB of RAM. The SoC was notably launched at CES 2017 in January last year. The smartphone has a dual rear camera setup that includes a 12-megapixel primary sensor with an f/2.0 aperture and a 12-megapixel monochrome sensor - paired with a dual-LED flash module. On the front, there is an 8-megapixel sensor along with an f/2.0 aperture and an 84-degree field-of-view. The front camera sensor also enables a Face Unlock feature.

Motorola has provided 64GB of onboard storage that is expandable via microSD card (up to 2TB). In terms of connectivity, the Moto Z3 has 4G VoLTE, Wi-Fi 802.11 a/b/g/n/ac, Bluetooth v5.0, GPS/ A-GPS, NFC, and USB Type-C. Sensors on board include an accelerometer, ambient light, gyroscope, fingerprint scanner (on the the right panel), magnetometer (compass), and proximity sensor. The handset packs a 3000mAh battery that offers fast charging through the bundled 15W TurboPower charger. Lastly, it measures 156.5x76.5x6.75mm and weighs 156 grams.

As we mentioned, alongside launching the Moto Z3, Motorola has announced that it has no plans to bring the Moto Z3 Force. The official Twitter account of Motorola US in response to a user query made the confirmation and said that they would not be launching any more Moto Z's this year. The formal confirmation put all the speculations around the Moto Z3 Force on rest and ultimately confirmed that the company has no plans to take on HTC U12+ and Samsung Galaxy S9 with a new flagship model this year.