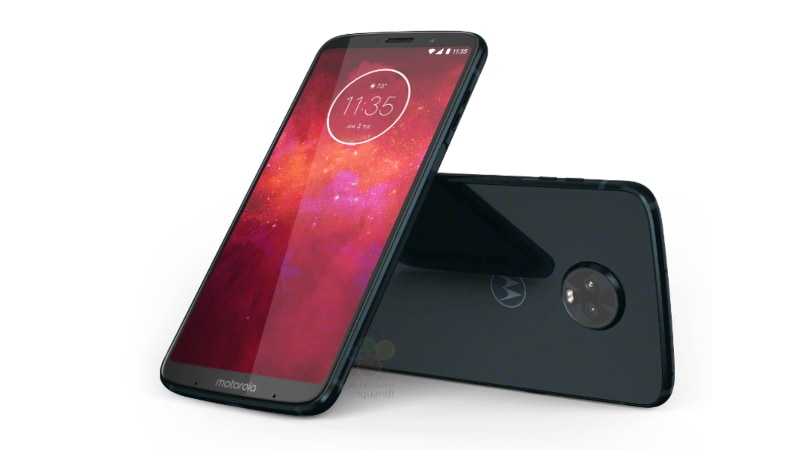 Moto Z3 Play official renders have been leaked ahead of its June 6 launch. The leaked renders detail the design of the next Moto Z Play model that will be the successor to last year's Moto Z2 Play. Earlier this week, a 5G Moto Mod that will come as an optional accessory of the new Moto smartphone spotted online. The Moto Mod was notably expected to debut at Mobile World Congress (MWC) 2018 back in February. The Lenovo owned company has scheduled a launch event in Brazil where we can expect the Moto Z3 Play alongside the new Moto Mod.

Folks at WinFuture.de have shared the leaked official renders of the Moto Z3 Play. The renders confirm the presence of a thin-bezel, 18:9 display as well as highlight the dual rear camera setup that is claimed to include two 12-megapixel image sensors. Unlike many other Android devices that arrived recently, the Moto Z3 Play is not likely to come with a notch on the front. The smartphone, however, appears to have moved the front-facing fingerprint sensor, which was embedded on the home button of the Moto Z2 Play, to the power/ lock button. It was also previously spotted that Motorola has used on-screen buttons to give wider coverage to the screen.

The back panel of the Moto Z3 Play spotted in the renders features a Pogo pin connector. As seen on previous Moto Z models, this will enable connectivity with Moto Mods. Moreover, the overall design of the new Moto Z model looks quite similar to the Moto Z2 Play.

On the specifications front, the WinFuture.de claims that the Moto Z3 Play features a 6-inch full-HD+ (1080x2160 pixels) AMOLED display and is powered by 1.8GHz octa-core Qualcomm Snapdragon 636 SoC, coupled with 4GB of RAM and 32GB as well as 64GB onboard storage options. The handset is reported to have an 8-megapixel front camera. These specifications match with the previous reports. Further, it is rumoured that the handset will come with a 3200mAh battery - supporting Motorola's TurboPower charger - and include 4G LTE, Wi-Fi, Bluetooth v5.0, USB Type-C, 3.5mm headphone jack, and NFC support. It is also expected that the new Moto Z Play will offer facial recognition and support live photos in the form of Cinemagraphs.

We need to wait until the official launch to know the price and availability of the Moto Z3 Play. In the meantime, it is safe to presume some more rumours coming on the way.