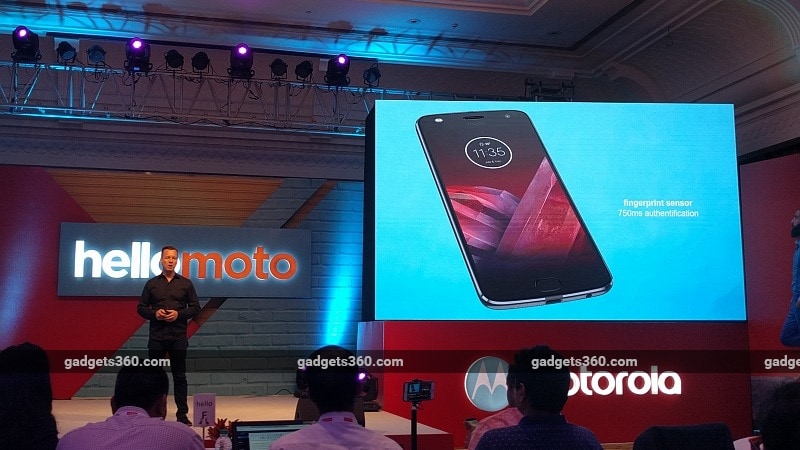 Moto Z2 Play smartphone with modular Moto Mods has been launched in India on Thursday. Available for pre-booking starting Thursday till June 14, the new Moto Z2 Play will go on sale via offline stores and Flipkart on June 15. Lenovo also announced the new Moto Mods - which it had launched last week - but did not detail when they would become available in India beyond saying "next few months." Only the Moto Z2 Play variant with 4GB RAM, 64GB storage, and dual-SIM card support has been launched in India, with the company eschewing the 3GB RAM/ 32GB storage variant for the country.

The Moto Z2 Play price in India is Rs. 27,999. Customers can pre-book the smartphone by paying Rs. 2,000, and then can choose to pay over 10 months with zero percent interest and zero processing fee. The company is also offering the Moto Armor pack - protective accessories including an aluminium case, back shell, selfie-stick, and protective film - to pre-booking customers.

Lenovo has also announced a 100GB additional Reliance Jio 4G data offer for Jio users, and the offer is applicable to regular buyers as well, not just those who pre-book Moto Z2 Play.

As for features and specifications, Moto Z2 Play runs on Android 7.1.1 Nougat and has a 5.5-inch full-HD (1080x1920 pixels) Super AMOLED display with Corning Gorilla Glass 3 protection and a pixel density of 401ppi. The smartphone is powered by a 2.2GHz Snapdragon 626 octa-core processor paired with 4GB RAM.

Coming to the camera, the Moto Z2 Play sports a 12-megapixel rear camera with a 1.4-micron pixel sensor, an aperture of f/1.7, a colour correlated temperature (CCT) dual-LED flash, as well as laser and dual autofocus lens (laser autofocus with expanded range up to 5 metres and 3 million dual autofocus pixels), At the front, there is a 5-megapixel selfie camera with an f/2.2 aperture, wide-angle lens, and a dual-LED CCT flash.

The 64GB of inbuilt storage on board the Moto Z2 Play can be expanded via microSD card (up to 2TB) - the smartphone has a dedicated SD card slot, separate from the SIM cards. The smartphone packs a 3000mAh battery, a major downgrade from 3510mAh battery seen on the predecessor Moto Z Play, but Lenovo claims the new, more efficient chipset will compensate for the loss. The included TurboPower charger provides 50 percent charge in just 30 minutes, and the battery is rated to deliver up to 30 hours of mixed usage.

Einstein's Theory of General Relativity Gets New Proof With Gravitational Microlensing
OnePlus 5 Price Tipped, May Be Much More Expensive Than OnePlus 3T