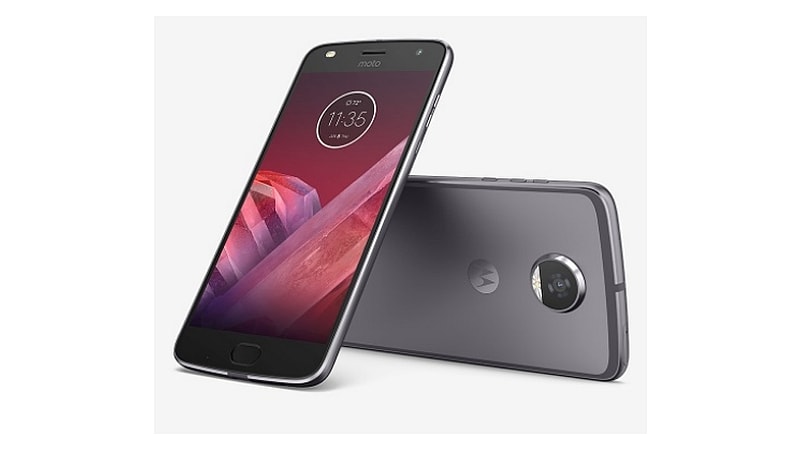 Lenovo brand Moto is set to launch its latest Z-Series smartphone in the country - the Moto Z2 Play - on Thursday. Unveiled last week, the smartphone is coming to India just seven days after its global launch - at least in terms of pre-bookings which begin from Thursday itself.

The Moto Z2 Play India launch will be live streamed, and you can catch it below. It begins at 12pm IST. The company has already detailed some of its pre-booking offers. Pre-booking lets customers pay Rs. 2,000 up front, and then pay the rest of the amount for Moto Z2 Play over 10 months with 0 percent interest. Lenovo is offering the Moto Armor pack, which includes protective accessories for the smartphone, as part of pre-booking offer to the customers.There will be offers on Moto Mods, both exact details have not yet been provided.

As for the Moto Z2 Play price in India, we can expect Lenovo to charge a slight premium over the US unlocked price unveiled last week - $499 (roughly Rs. 32,200). Like other offerings in the Moto Z series, the smartphone features support for Moto Mods thanks with connecting pins on the rear panel.

The Moto Z2 Play runs on Android 7.1.1 Nougat and has a 5.5-inch full-HD (1080x1920 pixels) Super AMOLED display with Corning Gorilla Glass 3 protection and a pixel density of 401ppi. The smartphone is powered by a 2.2GHz Snapdragon 626 octa-core processor paired with two bundle options – 3GB RAM/ 32GB storage and 4GB RAM/ 64GB storage. There’s also a microSD card slot for further expansion of storage (up to 2TB). It sports a 3.5mm jack and comes with USB Type-C

Coming to the camera, the Moto Z2 Play sports a 12-megapixel rear camera with a 1.4-micron pixel sensor, an aperture of f/1.7, a colour correlated temperature (CCT) dual-LED flash, as well as laser and dual autofocus lens (laser autofocus with expanded range up to 5 metres and 3 million dual autofocus pixels), At the front, there is a 5-megapixel selfie camera with an f/2.2 aperture, wide-angle lens, and a dual-LED CCT flash. As rumoured, the smartphone packs a 3000mAh battery, a major downgrade from 3510mAh battery seen on the predecessor Moto Z Play, but Lenovo claims the new, more efficient chipset will compensate for the loss. The included TurboPower charger provides 50 percent charge in just 30 minutes, and the battery is rated to deliver up to 30 hours of mixed usage.

The Moto Z2 Play is also water repellent with nano-coating and is only 5.99m thick. The smartphone, as mentioned brings Moto Mods support. It will support all the old Moto Mods, as well as the new ones that have been launched alongside.

Last week, alongside the Moto Z2 Play's launch, the company unveiled new Moto Mods as well - these include a Moto Power Pack that brings additional 2200mAh battery. This accessory weighs only 72grams more, comes in black and white colour options, and brings up to 16 hours of more power on board. In the US, it is priced at $49.99 (roughly Rs. 3,200).

There's also a Turbo Power Pack Moto Mod which brings a 3490mAh additional battery on board with fast charging support. It supports up to 30W TurboPower and is rated to charge up to 50 percent in just 20 minutes. It adds almost a day’s worth of power on the smartphone and weighs only 95 grams. In the US, the TurboPower Pack is priced at $79.99 (roughly Rs. 5,100).

Additionally, Moto has also launched a Wireless Charging Style Shell that lets you do exactly as the name suggests for the price of $39.99 (roughly Rs. 2,500) There’s also the introduction of the JBL SoundBoost 2 Moto Mod that comes with a kickstand, and is splash proof. It is priced at $79.99 (roughly Rs. 5,100), and come in black, red, and blue colour variants.

Lenovo also launched the Moto GamePad that will work with all games that support physical controllers. Instead of connecting to your smartphone via Bluetooth, it will use the Moto Mods connector to talk to your Moto Z2 Play and other compatible smartphones. It comes with a 1000mAh battery that can power the GamePad for up to 8 hours. The Moto GamePad, which packs a USB Type-C port for charging and a 3.5mm headphone jack as well, is priced at a $79.99 (approximately Rs. 5,150).