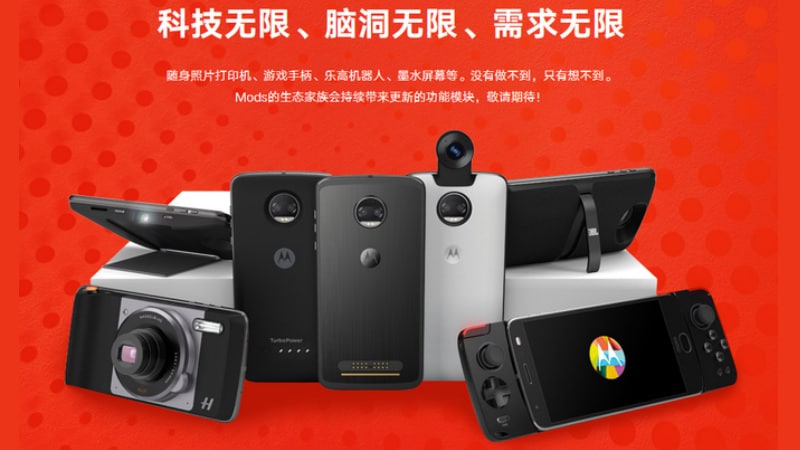 While the Moto Z2 Play has already been made official, the Moto Z2 and Moto 2 Force are yet to be unveiled. Moto has sent out invites for a #HelloMotoWorld event on July 25, and the two phones are largely expected to be announced. Now, the Chinese Moto site briefly confirms the launch of the Moto Z2 at the event, and the Moto Z2 Force has been separately spotted on AnTuTu revealing specifications details, and tipping an imminent launch as well.

Ahead of the unveiling, the official website of Moto in China briefly posted an image of the Moto Z2 smartphone revealing design details and confirming the arrival of the smartphone. According to the website, the Moto Z2 will launch on July 25. The smartphone also has a lot of resemblance to the Moto Z2 Play, apart from a few tweaks. It is seen to offer Moto Mods support, and will also sport a dual camera setup at the back – while the Moto Z2 Play only sported a single camera setup. On the website, it is seen sporting three colour variants – Grey, Silver, and Black – and is also seen support new Moto Mods launched recently like the 360 Degree Camera Mod.

As for specifications, the Moto Z2 smartphone is expected to feature a 5.5-inch (1440x2560 pixels) QHD AMOLED display. It is tipped to be powered by an octa-core Snapdragon 835 SoC paired with 4GB of RAM. It is expected to run on the latest Android 7.1.1 Nougat, and past GeekBench 4 scores of Moto Z2 were also reportedly at par with the Samsung Galaxy S8.

According to render leaks, the Moto Z2 is expected to come with a dual-LED flash support and a home button with fingerprint scanner embedded at the front of the smartphone. Notably, Moto Z2 seems to share some of its design elements with the Moto Z2 Play smartphone, such as the front flash and oval home button. Unfortunately, that’s all that we know about the Moto Z2 smartphone and we have to wait for the official announcement by the company to get more details.

Coming to the Moto Z2 Force, the smartphone was spotted on AnTuTu, and the benchmark listing tips a score of 168,000 points. The Moto Z2 Force is expected to be powered by the Snapdragon 835 SoC paired with Adreno 540 GPU and 6GB of RAM. The resolution of the screen is at QHD as well (1440x2560 pixels), and the inbuilt storage is expected to be at 128GB. The smartphone is listed to also run on Android 7.1 Nougat and the rear camera is seen sporting a 12-megapixel sensor while the front camera is tipped to sport a 5-megapixel sensor.

Previous leaks suggest that the Moto Z2 Force will also sport a dual camera setup and a dual LED flash at the back. It is also expected to support Gigabit LTE speeds and Moto Mods. The design aesthetic is expected to be similar to the Moto Z2 Play, and the smartphone may also be unveiled on July 25, alongside the Moto Z2.