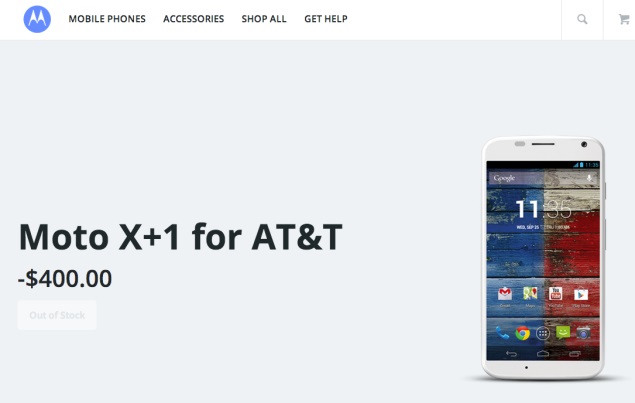 Soon after the Moto E launch, leaks surrounding the Moto X's successor continue to churn out more alleged details about the unannounced device. The latest in the series claims that the alleged Moto X+1 will be sold by all four mobile carriers in the US: AT&T, Sprint, T-Mobile and Verizon.

The leak comes from serial tipster @evleaks, who also suggests that the Moto Xsuccessor, believed to be dubbed Moto X+1, is codenamed Victara. @evleaks said, "Motorola Moto X+1 goes by codename Victara, and - no surprise here - is slated for sale by all four national carriers." The phone tipster has not revealed any details about the availability of the Moto X+1.

Notably, Motorola back in February had tipped that the successor to the Moto X was scheduled to launch late in the US summer.

Earlier leaks have already suggested that the Moto X+1, much like its predecessor, will come with customisation features, further corroborated by a Moto X+1 placeholder spotted on the Moto Maker Site.

The Moto X+1 was also spotted in another placeholder listing on the company's US site. The listing showed a Moto X (Review | Pictures) image, instead of a new Moto X+1 model, and had a placeholder price tag of $400.

An earlier report even noted a new handset, speculated to be the Moto X's successor, codenamed Motorola XT912A, whose specifications surfaced online in a benchmark result listing.

Earlier this month, Motorola unveiled its new dual-SIM budget smartphone, the Moto E, in India carrying a price tag of Rs. 6,999. The handset, much like the Moto G and Moto X, is available exclusively via online retailer Flipkart.

(Also see: Moto E Goes Out of Stock on Flipkart Within 48 Hours)

Motorola at its May 13 event also unveiled the LTE-capable version of the Moto G and the Moto G Ferrari Edition with Kevlar back panel.