Moto X successor rumours have been doing rounds of the Internet for a while now. The yet-to-be-announced Moto X+1 smartphone has been seen in earlier leaks and placeholder listings on the company's site tipping details about pricing.

However, the latest leak seems to indicate that Motorola might be considering re-launching its Moto X with 64GB built-in storage. A listing at the Moto Maker site, first reported by a Russian publication, tips that the alleged Moto X 64GB model will be priced at $449.99 (Rs. 26,000 approximately). The report has posted a screenshot of the page that purportedly shows a Moto X listed with three storage variant options - 16GB/32GB and 64GB and their respective prices. 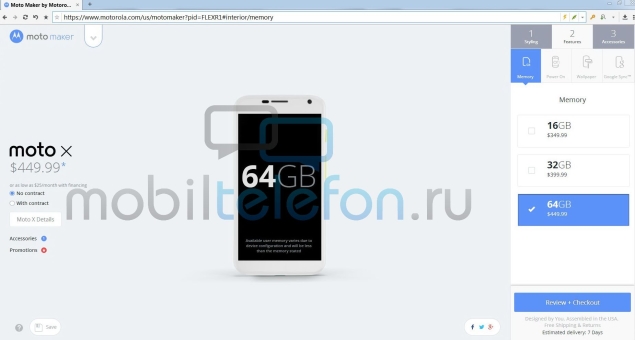 Further, the screenshot shows that the $449.99 price tag of the alleged Moto X 64GB model is for the handset without contract. Notably, we tried to check the same page seen in the leaked screenshot at the Motorola's US site but the page is now redirecting to the current Moto X listing.

It's worth noting that all these leaks should be taken with a pinch of salt as Motorola has not mentioned any details about the upcoming device and the legitimacy of the leaks remains questionable.

The Moto X made its way to India in March via Flipkart, which is now the exclusive online retailer of Motorola handsets in the country, carrying a Rs. 23,999 price tag.

Notably, Motorola back in February had tipped that the successor to the Moto X was scheduled to launch late in the US summer.

Earlier leaks have already suggested that the Moto X+1, much like Moto X, will come with customisation features, further corroborated by a Moto X+1 placeholder spotted on the Moto Maker Site.

The Moto X+1 was also spotted in another placeholder listing on the company's US site. The listing showed a Moto X (Review | Pictures) image, instead of a new Moto X+1 model, and had a placeholder price tag of $400.

An earlier report even noted a new handset, speculated to be the Moto X's successor, codenamed Motorola XT912A, with specifications surfacing online in a benchmark result listing.

Saavn 3.0 for Android With Revamped UI Now Available for Download
How to Take Screenshot on Any Device