Moto X 2017 Gets Leaked in Live Images; Tipped to Sport Snapdragon 625 SoC and 3GB of RAM 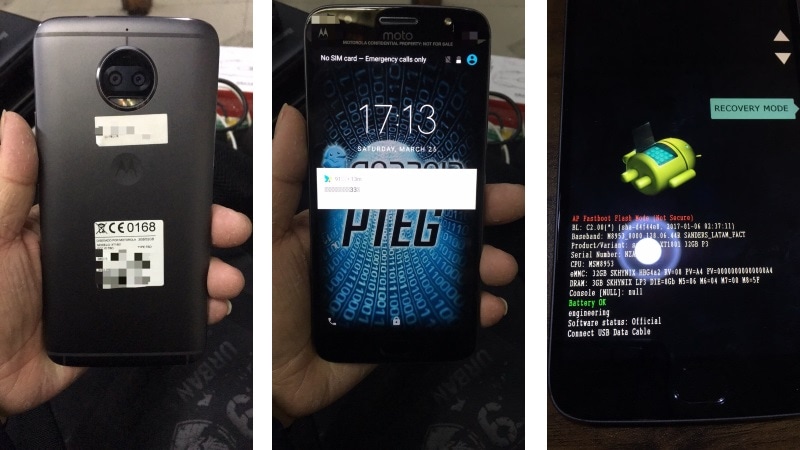 Lenovo's Moto X 2017 smartphone, which was leaked last year in renders and in video, has now been leaked in live images and seems to come with a similar design to some of the other Moto smartphones launched earlier. Notably, apart from the smartphone's design, several other specifications of the device have also been revealed with these live images.

The leaked images of Moto X 2017 smartphone, shared on Google Plus by user Jerry Yin, suggest that the device will come with a Moto Z-like circular camera setup but with dual rear cameras. The smartphone seems to have an oval-shaped fingerprint sensor at the front and come with flash support for the front camera as well. There is a trademark Moto logo with a dimple at the back and the smartphone in the live images sports antenna lines too.

Interestingly, there are no pogo pins visible that can enable support for Moto Mods and the device seems to have an all-metal design. In the leaked live images, there is a sticker at front that says "MOTOROLA CONFIDENTIAL PROPERTY: NOT FOR SALE". Interestingly, the leaked images also contain a bootloader screen that shares some of device's internal configuration as well.

As per the bootloader screen, the Moto X 2017 smartphone packs an MSM8953 processor (commonly known as Snapdragon 625) coupled with 3GB of RAM. The device is tipped to come with 32GB of inbuilt storage. The model number for the smartphone is XT1801, as per the leaked image.

Going by the specifications and the leaks, it appears like Moto X will be more of a budget-oriented smartphone and will come with an uninspiring design, which might make it hard for the company to generate interest in the device.

Amazon Buys Souq.com, the Middle East's Biggest Online Retailer
COAI Pushes for Auction in 2018, Says Market Should Be Allowed to Settle Down