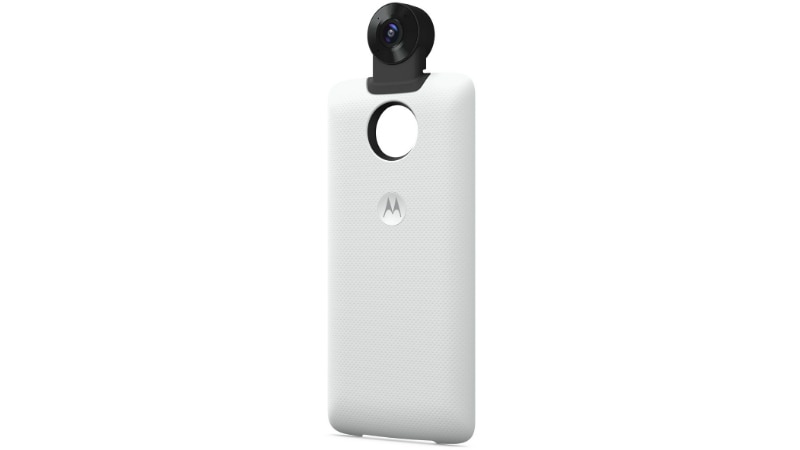 At an event in Ghana, Lenovo brand Moto has unveiled as many as six new Moto Mods. This includes the new Moto 360 Camera Mod, the ROKR Mod, the Studio Mod, DirecTV Mod, DSLR Mod, and the Action Mod. These Mods were unveiled at an event alongside a leading network provider in that region, MTN, and the event also saw the launch of several smartphones in that region.

TechDroider reports that all of these Moto Mods are a work-in progress, but the new Moto 360 Camera Mod is probably the closest to completion. It essentially has a 360-degree camera attached on top of a plastic back plate that then attaches to the Moto Z-Series phones. This will capture 360 images and video on the smartphone once it is attached, and is reminiscent of the Essential 360 camera launched a while earlier. The pricing, availability, or even international availability of the Moto Mods have not been announced yet.

A video of the event was also published on YouTube by GhanaWebTV and the company is seen demoing the ROKR and Studio Mod in collaboration with Marshall. The former amplifies speaker quality, while the latter is meant for a high quality microphone presumably for recording purposes. Just like the 360 Camera Mod, the microphone also juts out from the top.

Motorola has also partnered with DirecTV, and the DirecTV Mod essentially comes with an HDMI port that allows you to stream on the phone using the DirecTV streaming stick. Since AT&T’s DirecTV is a US-only thing, it is kind of odd that it was launched in Africa.

Anyway, the new DSLR Mod lets you mount camera accessories and dock a lens as well. It also has a shutter button and a light for the full-blown professional experience. Lastly, the Action Mod has a rotating camera to capture all those adventure videos, and is probably made for all those GoPro loving users.

As mentioned, all of these Moto Mods are in development stage, so it may be a while before they hit the market. Earlier in the year, Moto had announced that it would launch as many as 12 Moto Mods this year, and by the looks of it, it is bent on keeping its promise.