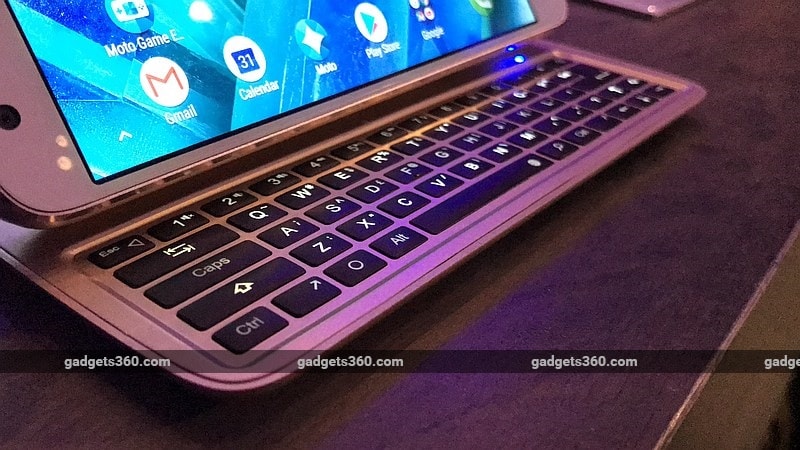 Lenovo brand Moto on Tuesday at CES 2018 announced the launch of two new products in its Moto Mod product lineup - the Lenovo Vital Moto Mod and the Livermorium Slider Keyboard Moto Mod. Both these Moto Mods were developed with a combination of crowdfunding campaigns on Indiegogo, Moto's Accelerator Program, and Moto Mod Development Kit distribution to developers. As before the Moto Mods will work on all Moto Z series smartphones.

As we mentioned, Moto has added two new Moto Mods to its lineup. The Lenovo Vital Moto Mod will be available for purchase in April for a price of $395 (roughly Rs. 25,200) and the Livermorium Slider Keyboard Moto Mod will be available for a purchase in Winter 2018 for $99 (roughly Rs. 6,300). Moto Mods are currently compatible with the Moto Z, Moto Z Play, Moto Z2 Play, Moto Z Force Droid, and the Moto Z2 Force Edition.

The new in-house Moto Mod from the phone maker offers users with the ability to check health vitals right on their smartphones. This Moto Mod claims to accurately measure five vital signs, including core body temperature, pulse, respiratory rate, heart rate, and systolic & diastolic blood pressure. All these vitals can be measured by placing your finger in the mod.

This Moto Mod adds a full-sized QWERTY keyboard and a 60-degree tilt to your Moto phone's display. The physical keyboard is a boon for users who are used to the BlackBerry-style smartphones of the past. The additional tilt makes it easier to write on the keyboard while viewing the output on the display.

Users now will also be able to browse all Moto Mods and get localised supports right from the updated Moto Z Market app.