Moto's Entire Smartphone Lineup for 2017 Gets Leaked, With a Few Surprises 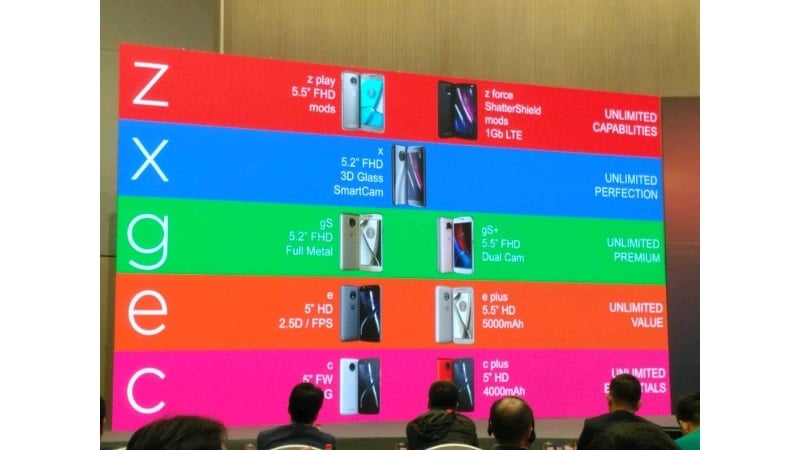 Usually we get leaks regarding one or two smartphones from a company at a time but now Lenovo's entire Moto lineup for 2017 seems to have popped up on the Internet in the form of a leaked presentation slide. As per the leaked image, the company will be launching nine smartphones spread across Moto Z, Moto X, Moto G, Moto E, and Moto C Series targeted at different buyers during the year. If you're wondering why the Moto G would still be an upcoming phone, after the launch of the Moto G5 and Moto G5 Plus, it appears a new Moto GS series is in the offing. Separately, a video of Lenovo's Moto X4 presentation has been leaked while seven of the company's upcoming smartphones have been tipped to feature Android Nougat.

First coming to the leaked image of entire Moto lineup. The presentation slide was obtained by well-known tipster Evan Blass and shows the names of the Lenovo's Moto-branded smartphones spread across 5 series. The new Moto C Series has been leaked several times in the recent past. In the leaked slide, the Moto C series has been described to cover 'Unlimited Essentials' in two models - Moto C and Moto C Plus. While Moto C will feature a 5-inch FWVGA (480x854 pixels) display, the Moto C Plus will come with a 5-inch HD (720x1280 pixels) display and a 4000mAh battery.

Moving to the popular Moto E Series, described to offer 'Unlimited Value', Lenovo will launch Moto E and Moto E Plus smartphones this year. The Moto E will sport a 5-inch HD display, 2.5D curved glass, and for the first time in this series - fingerprint sensor. On the other hand, Moto E Plus smartphone will come with a 5.5- inch display and a massive 5000mAh battery.

While the company launched Moto G5 earlier this year, it is expected to launch new smartphones in its G series that has been said to come as 'Unlimited Premium'. The leaked presentation image suggests that Lenovo will launch Moto GS and GS+ smartphones this year but Evan Blass says that the phones will be named Moto G5S and Moto G5S Plus instead. In its branding, Moto usually only appends the generation along with the smartphone series, i.e, calling the Moto G5 the Moto G fifth generation. Thus, Blass' naming clarification makes perfect sense when pointing a new GS-series. The Moto G5S will come with a 5.2-inch full-HD display and full metal body while the Moto G5S Plus will sport a 5.5-inch full-HD display and a dual-camera setup.

Next in line is the X series, which has been described to offer 'Unlimited Perfection' by the company. Again there is some discrepancy from the company's side on same grounds as the leaked image says Moto X but the phone is most likely to be called Moto X4. However, the smartphone has been suggested to come with 5.2-inch full-HD, curved edges, and a SmartCam. Notably, the phone's presentation was separately leaked in a video on Chinese website Baidu and suggested that it will feature a 5.2-inch full-HD display, latest Snapdragon 660 SoC, 4GB of RAM, 64GB of inbuilt storage, and a 3800mAh battery, as pointed out in a report by Android Police. The presentation video also suggested that the phone will come with curved edges and a Smart Camera feature.

Finally coming to Moto Z series, which has been said to feature 'Unlimited Capabilities', Lenovo will launch its Moto Z Play and Moto Z Force smartphones in 2017. While Moto Z Play will come with a 5.5-inch full-HD (1080x1920 pixels) display and feature support for Moto Mods, the Moto Z Force will sport a ShatterShield screen and feature support for gigabit LTE and Moto Mods. As Gigabit LTE is currently supported only by Snapdragon 835 SoC, the Moto Z Force will feature the aforementioned processor if not a newer variant.

Separately, Lenovo's 7 Moto-branded smartphones with model numbers beginning from XT have now received Wi-Fi certification from Wi-Fi Alliance, as pointed out in a report by MobileXpose. The model numbers in consideration are XT1770, XT1772, XT1773, XT1724, XT1725, XT1726, and XT1721. Interestingly, the phones have been suggested to come with Android 7.0/7.1.1 Nougat versions. These phones are expected to be launched in the Moto C or Moto E series and will all be powered by a quad-core MediaTek MT6737 SoC.