The Moto G9 Play is listed to be powered by a Qualcomm processor with the codename ‘guamp’. 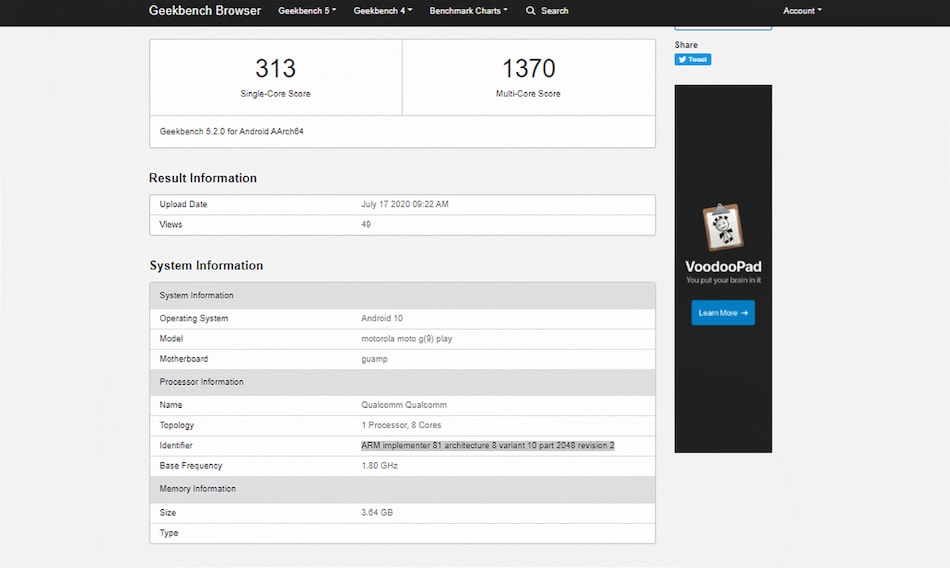 Moto G9 Play, the probable successor to the Moto G8 Play, has surfaced on Geekbench. The benchmarking site tips key specifications of the unannounced phone, and it is seen to come with more memory than its predecessor. This is the first time we are hearing of the Moto G9 Play and the Geekbench listing hints that the company is working to launch it in the future. There is no word from Motorola regarding the Moto G9 series launch in the near future as of yet.

The Geekbench listing of the Moto G9 Play hints at 4GB of RAM and the phone is listed to run on Android 10 software. The Moto G8 Play was launched in October last year, comes with 2GB RAM. This means that the Moto G9 Play is expected to see double the memory than its predecessor.

The Moto G9 Play is also listed to be powered by a Qualcomm processor going by the codename ‘guamp'. The processor is said to come with a base frequency of 1.8GHz and integrate eight cores. Judging by the details mentioned in the identifier, the Moto G9 Play could integrate a Snapdragon 600 series processor, but it is pure speculation from our end.

In any case, the Moto G9 Play will see a switch to Qualcomm processor, given that the Moto G8 Play is powered by the MediaTek Helio P70M SoC. Apart from this, the Geekbench listing offers no other information about the Moto G9 Play.

Another phone in the Moto G9 series - the Moto G9 Plus – was recently spotted on a Spanish online retail site with a price tag of EUR 277.15 (roughly Rs. 23,700) for the 4GB + 128GB storage variant. The phone was listed online with the model number XT2087 but specifications and other details of the phone were not mentioned on the site. The retail site also suggested that there may be two variants of the Moto G9 Plus in the offing.