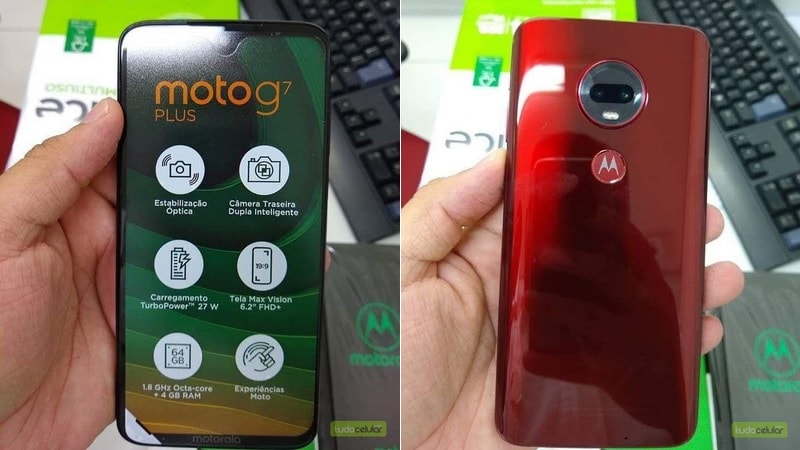 Motorola's Moto G7 series has been at the centre of leaks recently, with details like press images, hands-on photos, key specifications and even pricing information making its way online.  As per a new leak, the Moto G7 Plus will feature support for 27W TurboPower charging and will also boast of optical image stabilisation for reducing the blurry effect in images and videos caused by the movement of the hands. Additionally, the latest leak also brings us a new set of Moto G7 Plus' live images in its red colour variant as well as its retail packaging.

Talking about other details unearthed by the new set of leaked images, the packaging sticker on the upcoming smartphone's display indicates that it will come with support for a TurboPower fast charging standard with a rating of 27W. Battery capacity has not been revealed by the latest leak, but as per an alleged accidental listing of the Moto G7 Plus on the official Motorola website, the upcoming smartphone will come equipped with a 3,000mAh battery. Another important piece of information revealed by the fresh leak is that the Moto G7 Plus will feature optical image stabilisation (OIS) support for its dual rear camera setup that will reportedly consist of a 16-megapixel primary sensor with an f/1.7 lens and a 5-megapixel secondary sensor with an f/2.2 lens.

The branding film on the Moto G7 Plus' front panel further reveals that the Moto G7 Plus will feature an octa-core processor - reportedly the Qualcomm Snapdragon 636 - paired with 4GB of RAM and 64GB of inbuilt storage. The display will be a 6.2-inch Max Vision panel with full-HD+ (1080x2270 pixels) resolution. The leak also indicates that Motorola might also ship a transparent silicon protective cover in the Moto G7 Plus' retail box. There is no mention of the pricing, but the smartphone will reportedly be priced around the EUR 360 (roughly Rs. 29,300) mark. We'll get to verify all this information when the company officially launches the Moto G7 Plus at an event scheduled for February 7, alongside the Moto G7, Moto G7 Play and the Moto G7 Power.