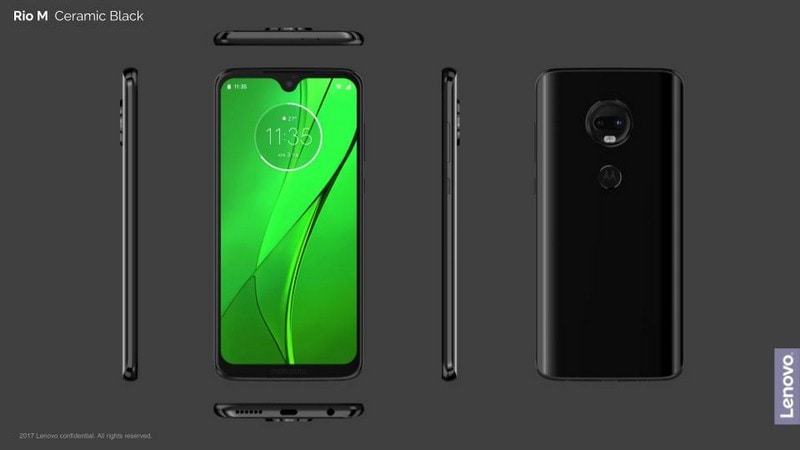 Lenovo-owned Motorola is anticipated to launch the Moto G7-Series at an event today in Brazil, with four models - Moto G7, Moto G7 Plus, Moto G7 Power, and the Moto G7 Play. Ahead of the official announcement, the Moto G7 has been listed on Verizon's carrier certification page. The listing shows the upcoming smartphone in its black variant from all angles and also reveals most specifications such as its display size and resolution, battery capacity, dimensions and network bandwidth support among others.

The Moto G7's carrier certification listing shows the smartphone from all sides and seemingly confirms its final design. The Moto G7 is listed under the model number XT1962-1, alongside multiple images of the smartphone clad in black colour from all sides. The Motorola smartphone's carrier certification page states that the Moto G7 will sport a 6.24-inch In-Cell display with full-HD+ (1080x2270 pixels) resolution and “mini-notch” display, while the battery capacity is listed at 3,000mAh. The dimensions of the upcoming smartphone are strangely listed at 56.96x75.34x7.92mm while network connectivity standard is listed at LTE Cat. 6 alongside the details of supported bandwidths. Key features being touted include a "smart camera with best low light performance" and "all day battery life and powerful charging".

The images of the Moto G7 on Verizon's database have an uncanny resemblance to the leaked renders and alleged live images that have surfaced online in the past few months. Design aspects such as the waterdrop notch, circular camera module, curved rear panel as well as the placement of the fingerprint sensor in the images on Verizon's certification database match perfectly with previously leaked renders and live images. The Verizon listing was first spotted by PhoneArena.

Other leaked specifications of the Moto G7 include the octa-core Qualcomm Snapdragon 632 SoC ticking alongside 4GB RAM and 64GB of internal storage. In the imaging department, the Moto G7 will come equipped with a dual rear camera setup comprising of a 12-megapixel primary sensor with an f/1.8 lens and a 5-megapixel secondary sensor with f/2.2 lens, while an 8-megapixel front shooter will take care selfies. It will feature a USB Type-C port and 3.5mm jack, while Android 9 Pie will handle things on the software side. The Moto G7 will reportedly be priced at EUR 300 (roughly Rs. 24,400) and is expected to come in Black, Silver and Red colour options.

Europe's Ariane 6 Rocket Is Doomed Even Before First Flight, Auditor Finds
Inside a Berlin 'Gaming House' - Where E-Sports Elite Hone Their Skills