Moto G60 is tipped to feature a triple rear camera setup with a 108-megapixel primary sensor. 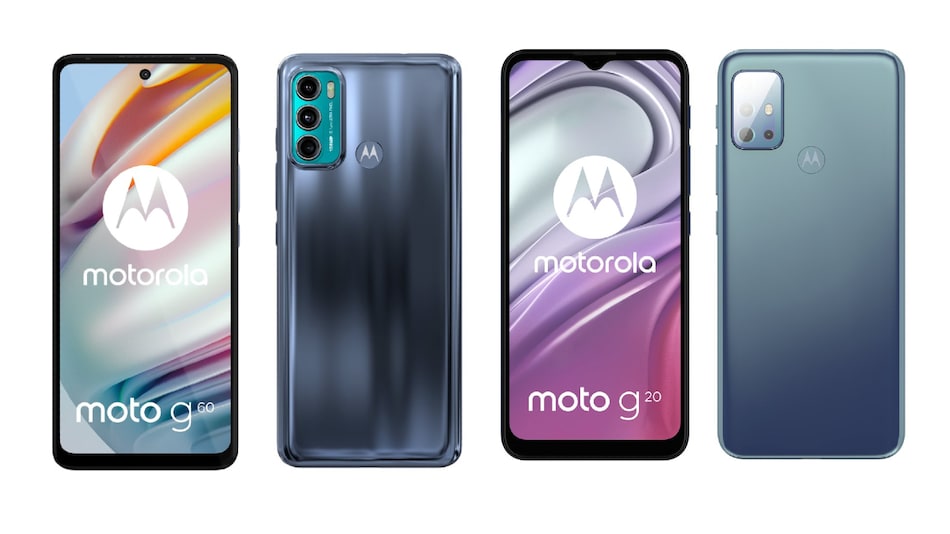 Moto G60 is tipped to feature a hole-punch display

Moto G60 and Moto G20 design and specifications have been leaked by a tipster. The leaked renders show the phones from both front and back. The Moto G60 appears to be the more premium model of the two with a hole-punch display design and triple cameras at the back. The Moto G20 is seen sporting a waterdrop-style notch display and has appeared in renders with quad cameras at the back. Both the phones are said to feature a rear fingerprint sensor.

Tipster Abhishek Yadav has leaked renders and specifications of the two phones – the Moto G60 and the Moto G20. The Moto G60 is seen to sport a flat hole-punch display with the cutout for the selfie camera placed in the top centre of the screen. There is a slight chin at the bottom of the display and the back has a glossy black finish. The phone appears to have a rectangular camera module at the top left corner of the back panel with three cameras inside aligned vertically. The tipster suggests that the Moto G60 will come with a 108-megapixel primary sensor, which is in line with an earlier leak. The phone is also tipped to have a rear fingerprint sensor with the Motorola logo embossed inside.

The Moto G20 render, leaked by Yadav, suggests the phone may feature a flat display with a waterdrop-style notch. This model has a slightly thicker chin than the Moto G60. At the back, the Moto G20 has a rectangular camera module at the top left corner that houses four sensors in an L-shaped configuration. The phone is also seen to have a rear fingerprint sensor integrated with the Motorola logo. The Moto G20 back panel is seen to have a blue gradient finish.