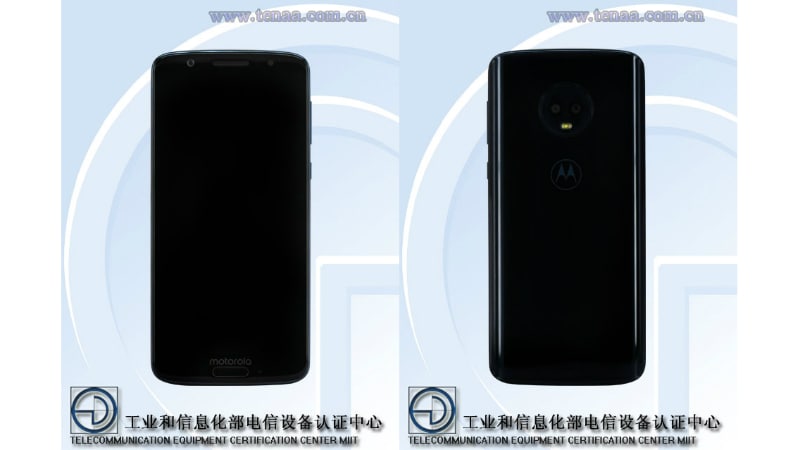 Lenovo-owned Motorola hasn't yet launched a smartphone in the first three months of 2018, but, if rumours are anything to go by, we might see the company's entire range of budget smartphones getting launched in the coming weeks. According to several reports and leaks, the Moto G6, Moto G6 Plus, and Moto G6 Play are expected to make an appearance. And, with the latest sighting on Chinese certification website TENAA, we have a clearer look at the one of the handsets - the Moto G6. The listing shows certain design elements and specifications of the smartphone.

According to a listing on TENAA, a Motorola-branded handset with licence number 02-B478-180922 has been posted on March 22. The phone is shown to sport a 5.7-inch display, run Android, and bear a 3000mAh battery. The listing also reveals the Moto G6 will be a dual-SIM smartphone with connectivity options such as Bluetooth, GPS, 4G LTE, and Wi-Fi. Dimensions of the handset are 154.5x72.2x8.3mm.

Talking about the renders, the design is reminiscent of last year's Moto X4. It is seen to have a sleek metal frame with a camera bump on the back. There is also a horizontal dual camera setup on the back. Evidently, the phone does not have a front-facing notch nor does it have a vertical camera module, unlike other Android OEM-branded phones flooding the market in 2018.

Last month, the Moto G6 was spotted on Geekbench with almost all specifications outed in the listing. The Moto G6 is suggested to sport a 5.7-inch full-HD+ (1080x2160 pixels) display, sport a Qualcomm Snapdragon 626 SoC, 3GB of RAM, 32GB/ 64GB inbuilt storage, and 12-megapixel, 5-megapixel camera combo on the back. On the front is a 16-megapixel camera for selfies and video calling. The phone scored a decent 3582 points in multi-core performance and 709 points in single-core performance on Geekbench.