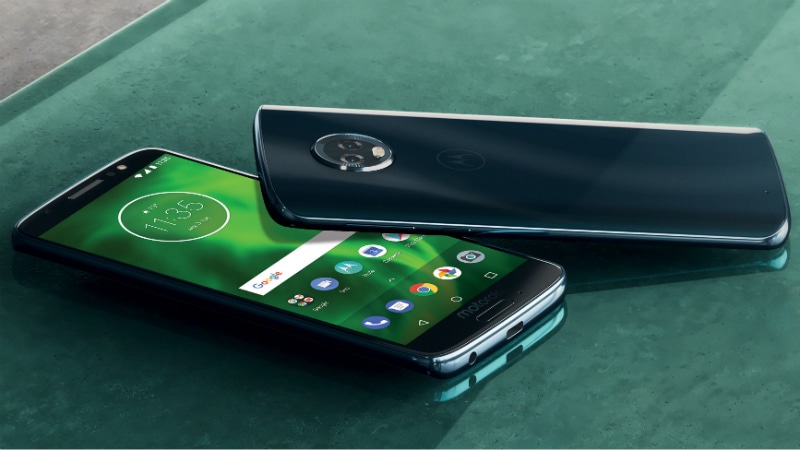 Less than a month after their formal debut in Brazil, the Moto G6 and Moto G6 Play are now heading to India. The launch of the Moto G6 and Moto G6 Play has been confirmed by none other than Motorola. The Lenovo-owned company's India Twitter handle on Tuesday posted a teaser that said the smartphones are "coming soon". Historically, Motorola has brought its new models to the Indian market following their global announcement. The Moto G5, for instance, was launched in the country just weeks after it was announced at the MWC 2017 in Barcelona.

The teaser, which was posted through the Motorola India account on Twitter, includes a 14-second video that confirms the arrival of the Moto G6 and Moto G6 Play in the country. It also calls a bunch of professionals, including techies, movie buffs, artists, photographers, explorers, and fashionistas to anticipate the upcoming launch together. The company has also created a dedicated site for users to register themselves for notifications surrounding the launch.

Interestingly, Motorola is set to launch the Moto G6 family in China on May 17. This suggests that the India launch may take place soon. However, the company hasn't revealed any particular details about the launch schedule. There also isn't any information about the prices of the Moto G6 series in India.

The dual-SIM (Nano) Moto G6 runs stock Android 8.0 Oreo and features a 5.7-inch full-HD+ (1080x2160 pixels) Max Vision IPS display with an 18:9 aspect ratio. The handset is powered by a 1.8GHz octa-core Snapdragon 450 SoC, paired with Adreno 506 GPU and 3GB/ 4GB RAM options. It has a dual camera setup on the back with a 12-megapixel primary sensor and a 5-megapixel secondary sensor. These sensors are accompanied by dual-LED flash. On the front, the smartphone has a 16-megapixel sensor with a selfie flash.

Motorola has provided 32GB and 64GB of onboard storage options on the Moto G6 that both are expandable via microSD card (up to 128GB). The smartphone also has 4G LTE, Wi-Fi 802.11 a/b/g/n, Bluetooth v4.2, GPS/ A-GPS, USB Type-C, and a 3.5mm headphone jack. Sensors on board include an accelerometer, ambient light, gyroscope, magnetometer, proximity, and a fingerprint reader. Besides, the Moto G6 packs a 3000mAh battery, which supports TurboPower charging via a proprietary charger, and measures 153.8x72.3x8.3mm.

Similar to the Moto G6, the dual-SIM (Nano) Moto G6 Play runs stock Android 8.0 Oreo but has a 5.7-inch HD+ (720x1440 pixels) Max Vision IPS display with an 18:9 aspect ratio. Under the hood, it has an octa-core Snapdragon 427 SoC, paired with Adreno 308 GPU and 2GB/ 3GB RAM options. For capturing images and recording videos, there is a single, 13-megapixel camera sensor with an f/2.0 aperture and LED flash. An 8-megapixel camera sensor is available on the front, featuring an 80-degree lens that has an f/2.2 aperture.

Nokia 5, Nokia 6 (2017) to Get Android P Update; Nokia 3.1 Spotted
Pokemon for Nintendo Switch to Be Revealed This Month, May Borrow From Pokemon Go: Report