Moto G5S Plus India Launch Set for August 29; Will Be an Amazon Exclusive 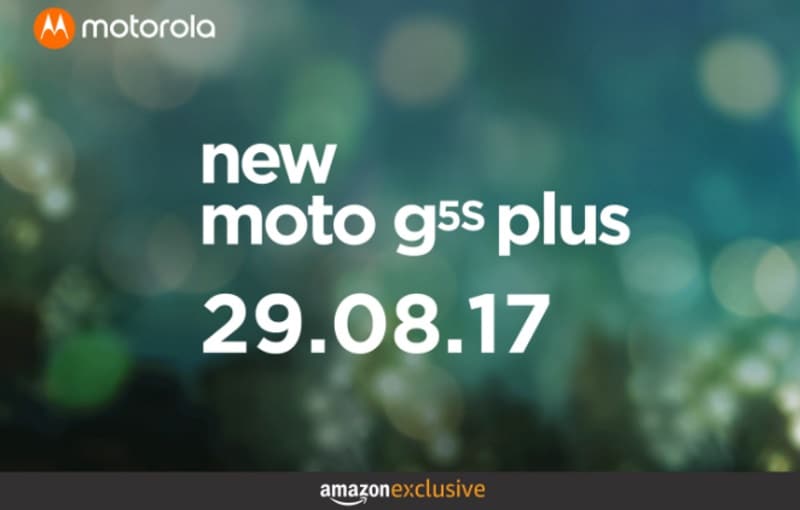 Lenovo launched its Moto G5S and Moto G5S Plus smartphones in August and now the company is finally bringing the latter handset to India. As per a dedicated page on Amazon India, the Moto G5S Plus will be launched in India on August 29 at 12pm IST and the smartphone will be sold exclusively through the website. In Europe, the pricing for the smartphone starts from EUR 299 (roughly Rs. 22,700).

It's not known when the Moto G5S Plus will go on sale in India, with the Amazon teaser evidently referring to the launch of the smartphone. To recall, the highlight feature of Moto G5S Plus is its camera. The smartphone comes with a dual camera setup at the back, with two 13-megapixel sensors, and an 8-megapixel front camera with wide-angle lens and LED flash support. Another highlight feature on the handset is the use of an all-metal unibody design by the company. The Moto G5S on the other hand may be launched as an offline-only smartphone, if the company continues the strategy it has followed for its other regular and 'plus' variants over the past year in India.

In terms of specifications, the Moto G5S Plus runs Android 7.1 Nougat out-of-the-box and sports a 5.5-inch full-HD (1080x1920 pixels) display. It is powered by an octa-core Qualcomm Snapdragon 625 SoC clocked at up to 2.0GHz. Moto G5S Plus has been made available by the company in two RAM/ storage options, i.e. 3GB RAM/32GB storage and 4GB RAM/64GB storage. The storage on the Moto G5S Plus is further expandable up to 128GB via microSD card.

In terms of connectivity, the Moto G5S Plus offers options including 4G LTE connectivity, Micro-USB, Bluetooth 4.1, GPS, Wi-Fi 802.11 a/b/g/n, and 3.5mm headphone jack. Despite the 'Plus' moniker, smartphone houses a 3000mAh battery just like the regular Moto G5S smartphone. However, the company claims that the TurboPower feature provides users with 6 hours of power with just 15 minutes of charging on the Moto G5S Plus. The Moto G5S Plus also comes with fingerprint scanner embedded in the front-mounted oval-shaped home button. Moto G5S Plus was launched in Lunar Gray and Blush Gold colours by the company. Notably, the company has not announced anything regarding the launch of the regular Moto G5S variant.

Users can sign up with Amazon India to get notified about the device's launch and availability but further details are likely to be announced at the launch later this month.