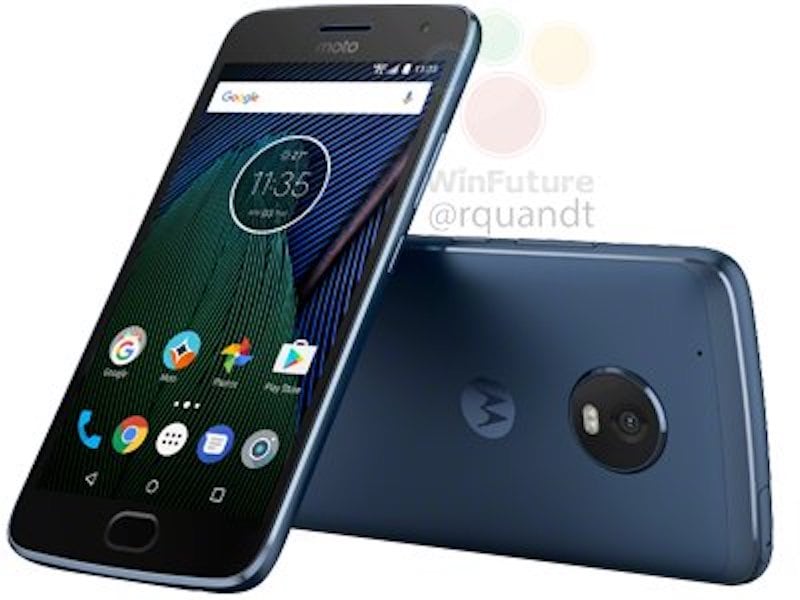 Lenovo brand Moto's newest offerings, the Moto G5 and Moto G5 Plus, were launched at MWC 2017 last month. The Moto G5 Plus went on sale in India last week and it is now being reported that pre-orders for the smartphone have opened up in the UK. It also looks like the larger model will be offered in a Sapphire Blue variant, after press renders of the Moto G5 were leaked on Wednesday.

On Wednesday, some press renders of the Moto G5 in a new Blue Sapphire colour were leaked online by tipster Roland Quandt. The same source, later tweeted a press render of the Moto G5 Plus in Sapphire Blue, confirming that the colour option will be available for both the devices. It is yet to be announced when the new colour will be made available. So far, both the Moto G5 and Moto G5 Plus were available in Lunar Grey and Fine Gold colour variants with the Sapphire Blue being announced exclusively for three carriers.

Coming back to the Moto G5 Plus, the smartphone has been listed for pre-order on UK-based Carphone Warehouse. The site lists only a 32GB storage option for the handset, and there's no mention on when the 64GB variant will be available. The Moto G5 Plus will be available in Fine Gold and Lunar Grey colour options with the Sapphire Blue variant not being listed as of now.

The Moto G5 Plus was launched in India starting at Rs. 14,999. The smartphone sports a 5.2-inch full-HD (1080x1920 pixels) IPS LCD display with Corning Gorilla Glass 3 protection. It is powered by a 2GHz Snapdragon 625 octa-core SoC and is coupled with either 3GB or 4GB of RAM in India. The handset is offered in 16GB or 32GB of internal storage in the country, which is expandable via microSD card (up to 128GB).

Optics for the Moto G5 Plus include a 12-megapixel rear camera, complete with dual autofocus pixels, 4K video recording, an f/1.7 aperture, and dual-LED flash and a 5-megapixel front-facing camera with an f/2.2 aperture and a wide-angle lens. Connectivity options include 4G LTE, Wi-Fi 802.11 a/b/g/n, GPS/ A-GPS, NFC, Bluetooth v4.2, 3.5mm audio jack, and Micro-USB. The Moto G5 Plus is fitted with a 3000mAh non-removable battery with TurboPower charging. It measures 150.2x74x9.7mm and weighs 155 gram.

Lava to Sell Only 6 Smartphone Models at a Time, Focus on Retail Stores