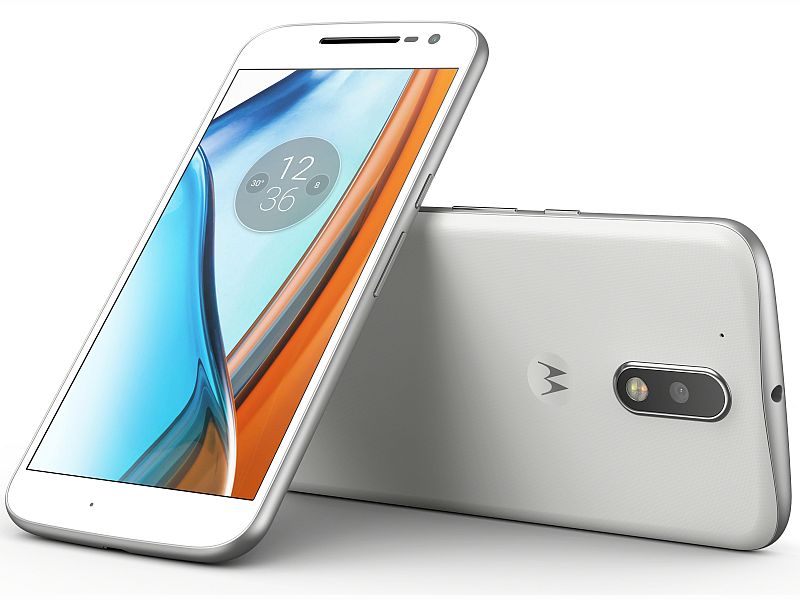 Motorola, as promised, has revealed the pricing details of the Moto G4 for the Indian market. Priced at Rs. 12,499, the new Moto G will be available starting midnight Wednesday exclusively via Amazon India.

Specifications for the two smartphones are nearly identical, though the differences are significant. Like the Moto G4 Plus, the Moto G4 runs Android 6.0.1 Marshmallow, supports dual-SIM (Micro-SIM cards), and sports a 5.5-inch full-HD (1080x1920 pixels) display with a pixel density of 401ppi and Corning Gorilla Glass 3 protection. The smartphones are powered by a 1.5GHz octa-core Qualcomm Snapdragon 617 (MSM8952) SoC coupled with an Adreno 405 GPU. While the Moto G4 Plus comes with a 3GB of RAM variant, the Moto G4 only bears 2GB of RAM. It also misses out on the fingerprint sensor that's embedded on the home button of the Moto G4 Plus.

The Moto G4 bears a 13-megapixel rear camera with f/2.0 aperture and phase detection autofocus (PDAF) apart from a dual-LED colour-balancing flash. The Moto G4 Plus on the other hand bears a 16-megapixel rear camera, with laser autofocus in addition. Both sport 5-megapixel front-facing cameras with an 84-degree wide field of view and an f/2.2 aperture. The 16GB of built-in storage on the Moto G4 is expandable via microSD card (up to 128GB), and it doesn't come in a 32GB storage variant like the Moto G4 Plus.

Connectivity options on board the Moto G4 include 4G LTE, Bluetooth v4.1, Wi-Fi 802.11 a/b/g/n, Micro-USB, 3.5mm audio jack, and GPS/ A-GPS. It weighs in at 155 grams and measures 153x76.6x9.8mm, with its thinnest point being 7.9mm thick. It is powered by a 3000mAh battery that is rated to deliver up to 24 hours of mixed usage battery life. The TurboCharger is bundled with the handset, as is the case with the Moto G4 Plus. Sensors on board include an accelerometer, ambient light sensor, and proximity sensor.