Moto G10 Power is confirmed to pack 6,000mAh battery and have a quad camera setup. 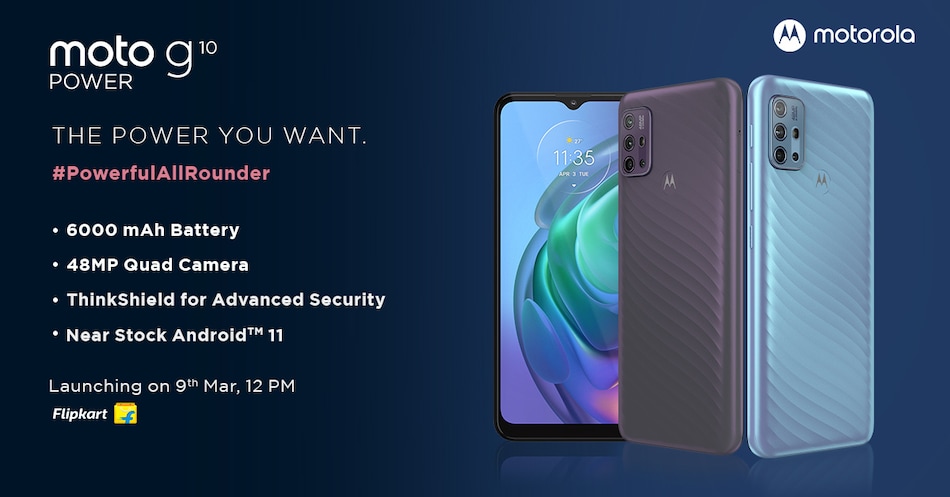 A host of specifications of the Moto G10 Power have been teased ahead of the launch event, including renders. The Moto G10 Power is confirmed to pack a 6,000mAh battery and feature a quad camera setup at the back with a 48-megapixel main camera. The phone is also set to integrate ThinkShield for advanced security and is running on Android 11 software.

Renders show the Moto G10 Power features a waterdrop-style notch and a ribbed back panel in textures of black and blue. There is a rectangular camera module at the back with a rear fingerprint sensor. Flipkart availability has also been confirmed. The 6,000mAh battery on the Moto G10 Power is said to last for two days. The company claims that users can stream music for 190 hours, watch videos for 23 hours, and browse the web for 20 hours. The quad camera setup is said to have a macro and a depth sensor as well.

Moto G30 availability has also been confirmed on Flipkart. The phone was first introduced in Europe last month and its specifications are already known. The Moto G30 runs on Android 11, features a 6.5-inch HD+ display, and is powered by the Snapdragon 662 SoC. The phone has a quad camera setup with a 64-megapixel main camera. It packs a 5,000mAh battery as well. Pricing information of both the phones will be unveiled at the launch event tomorrow. The Moto G10 Power and Moto G30 launch event will begin at 12pm (noon).