Moto G Successor Leaked in Images Ahead of September 4 Launch 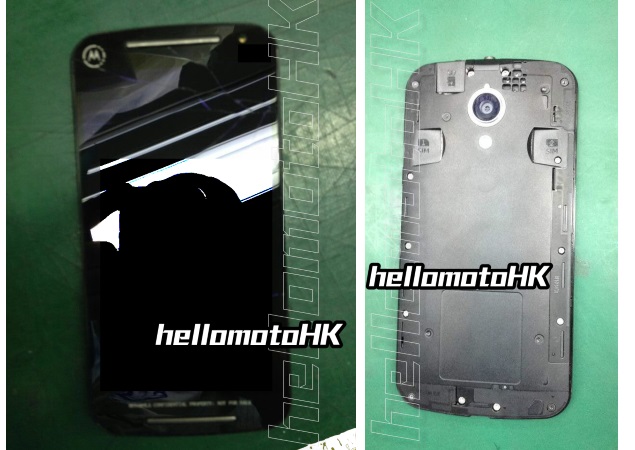 Ahead of Motorola's September 4 launch event, some leaked images purportedly showing the Moto G2 handset have surfaced online, along with a comparison with the Moto G.

HellomotoHK, the tipster who has been posting images of claimed to be of Motorola's upcoming smartphones in recent few weeks, has again obtained images of the yet-to-be-announced Moto G successor, believed to be dubbed Moto G2.

The tipster posted images on Facebook that are claimed to show the front and rear, as well as the changeable shells of the unannounced Moto G2. The leaked front panel image shows the handset sporting dual speaker grills both on the top and bottom of the display, like the Moto E. The rear panel leaked image shows the primary camera accompanied by an LED flash, and also shows the non-removable battery on the Moto G2. Another posted image by HellomotoHK shows the changeable shells of Moto G.

The Facebook post said, "You can fully preview the next generation Moto G here! Same Dual-SIM design plus microSD memory card support. The back cover is removable, so you can also customize the phone with the Motorola Shells."

In another Facebook post, HellomotoHK has highlighted some of the major upgrades expected in the Moto G2 such as a 5-inch display when compared to 4.5-inch on the Moto G; thinner bezels than its predecessor; 8-megapixel camera instead of the 5-megapixel found on the Moto G, and in addition, front stereo speakers apart from support for microSD card.

It seems Motorola is taking note of shortcomings of the Moto G and acknowledged one of its biggest issues - limited inbuilt storage. If HellomotoHK is to be believed, the Moto G2 will come with expandable storage support. Notably, Motorola has definitely acknowledged this shortcoming in the past, and the release of the Moto G 4G with microSD card support in May for select markets is evidence of the cognisance.

Other rumoured specifications of the Moto G2 include a Snapdragon 400 chipset with a quad-core 1.2GHz Cortex-A7 CPU; an Adreno 305 GPU; 1GB of RAM; 2-megapixel front camera; 8GB of internal storage, and Android 4.4.4 KitKat.

Notably, out of the rumoured eight devices said to debut before Christmas, the successors to the popular Moto X and Moto G - rumoured to be called the Moto X+1 and Moto G2 respectively - alongside the much-awaited Moto 360 smartwatch, are likely to launch at a pre-IFA event on September 4.

Motorola India has also confirmed an event on September 5 in the country, where the company is expected to launch the successors of the Moto X and Moto G.