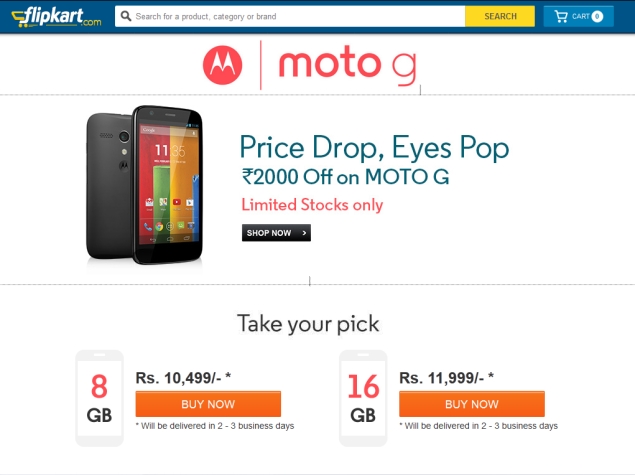 While speculation about the successor to the Moto G continues do rounds of the Internet, Motorola and Flipkart have slashed the prices of the Moto G by Rs. 2,000 in India for a limited period.

Both storage variants of the dual-SIM Motorola Moto G was launched back in February in India. The company had officially announced the device in November.

Motorola began rolling-out out the Android 4.4.4 KitKat update in July for the Moto G along with the Moto E and Moto X in India.

The smartphone features a 4.5-inch HD 'edge-to-edge' display with a resolution of 720x1280 pixels (translating to a pixel density of 329ppi) and boasts of a Corning Gorilla Glass 3 screen. Powered by a quad-core 1.2GHz Qualcomm Snapdragon 400 processor that's coupled with an Adreno 305 GPU, the Moto G features 1GB of RAM.

On the camera front, the Moto G sports a 5-megapixel rear camera along with an LED flash and also includes a 1.3-megapixel front-facing camera. The rear camera supports HD (720p) video recording.

The Motorola Moto G also features water-resistant nano-coating on the inside and outside. It packs a 2070mAh battery.

Recently the alleged successor to the Moto G was spotted in a leaked image along with specifications. A report from a Spanish website had indicated the refreshed Moto G (which is expected to be called the Moto G2) to feature a similar design as the Moto E.