Motorola over the weekend started sending invitations for a pre-IFA event on September 4, where the company is expected to launch the successors of the Moto X and Moto G alongside its much-awaited Moto 360 smartwatch. Motorola India has now confirmed an event on September 5 in the country. 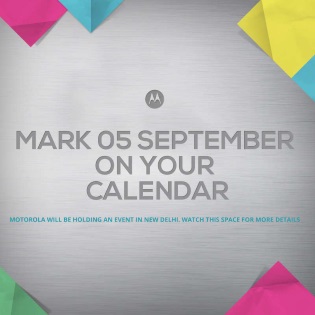 The official invite, without revealing much about the devices that are expected to be launched in India, reads, "Mark 05 September on your calendar. Motorola will be holding an event in New Delhi."

It's worth noting that Motorola India's invite for September 5 has the same colour combination - Blue, Green, Pink, and Yellow - as the global launch event invite.

For those unaware, Motorola's global launch invite for September 4 event included a cootie catcher that opened up to reveal four icons: A phone with an X in the middle, a phone with a G, a watch, and what appeared to be a Bluetooth headset.

Considering that the invite says, "Watch this space for more details," we can expect more details to be revealed about the event in coming days. BGR India reported the Motorola India launch event invite first.

Motorola may not have revealed any details; though, the two smartphones that are expected to be launched first at the September 4 event are the successors to the popular Moto X and Moto G - rumoured to be called the Moto X+1 and Moto G2 respectively.

Another much-awaited device is the Moto 360 smartwatch, which was initially introduced in March and was briefly listed over the weekend at an online retailer with pricing and other details. Lastly, the identity of the Bluetooth headset, seen in the global invite, remains a bit of a mystery.

India is definitely an important market for Motorola. Earlier this year, Motorola launched the Moto E at simultaneous launch events in Delhi and London.

The company has since seen great demand for the budget Moto E, and after its debut on Flipkart there have been multiple instances where the handset has gone 'out of stock' and came back 'in-stock'.

On the whole, Motorola's re-entry into the Indian market with the budget Moto E and Moto G, alongside mid-range Moto X has seen impressive response from the consumers in India. It is therefore not surprising the company is once again holding its launch event in India almost simultaneously with the global one.

Ranbir Kapoor Teams Up With Saavn as a Creative Collaborator
FBI Probing Reported Theft of 1.2 Billion Passwords by Russian Hackers