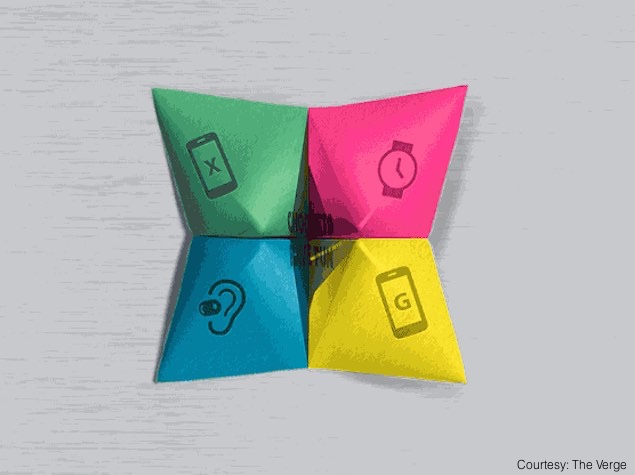 Motorola has sent out invitations to an event on September 4, where the company is expected to launch four new products.

The Verge shared a copy of the invite sent by the company for an event to be held in Chicago. The invite to "a Moto Launch Experience" includes a cootie catcher that opens up to reveal the phrases "Choose To Discover" and "Choose to Have Fun."

When the cootie catcher closes, the report notes, there are four icons: A phone with an X in the middle, a phone with a G, a watch, and what appears to be a Bluetooth headset. This seems to be a hint from the company that we will likely see four new products at the September 4 event.

While there is no official word from Motorola, the two smartphones are widely expected to be successors to the popular Moto X and Moto G - rumored to be called the Moto X+1 and Moto G2 respectively - while the watch is almost certainly the Moto 360 smartwatch. The identity of the Bluetooth headset is a bit of a mystery though.

Motorola has enjoyed a resurgence in the smartphone market, thanks largely to the attractive pricing of its offerings like the Moto X, Moto G, and more recently, the Moto E, and the company would be hoping to replicate the success with its next-generation lineup.