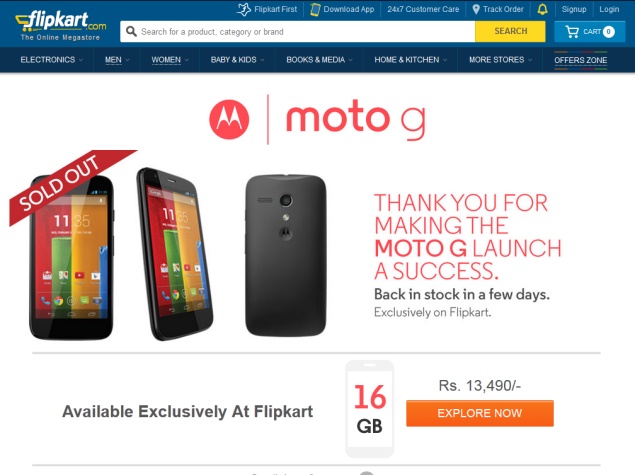 While Motorola has sent out invitations to a pre-IFA event on September 4, its popular budget smartphone Moto G (16GB) has gone out of stock in India at exclusive retail partner Flipkart. With the launch of the successor just around the corner, Flipkart could very well be preparing to list the new phone. Meanwhile, what appears to be the anticipated Moto G2 was spotted on Indian import/ export website Zauba.

Now priced at Rs. 13,490, the Moto G (16GB) listing on Flipkart is captioned, "Thank you for making the Moto G launch a success. Back in stock in a few days. Exclusively on Flipkart." Notably, the 8GB version of the Moto G recently went out of stock a few days ago and the inventory has not been replenished till now.

On the other hand, the Indian import/ export website Zauba has listed (via Pricebaba) the India arrival of roughly 60,000 Black and 14,000 White Motorola Moto G XT1068 smartphones, which is anticipated to be the Moto G2 or successor to the Moto G, shipped between August 14 and August 30. The alleged Moto G2 units shipped from China to Bangalore are priced at Rs. 10,640 per unit. Notably, the import/ export website price listings are only the declared values for customs purposes, and usually are not accurate reflections of actual market price.

Last month, the device was reported to ship on September 10, as tipped by a Motorola representative. However, the report had added that some retailers should get the first batch of the alleged Moto G2 by the end of August, which appears to be the case for Motorola's exclusive Indian retailer Flipkart - with which the company has enjoyed much success.

If above speculation is correct, Indian consumers might see retail availability of the Moto G2 immediately after the India launch. Motorola has separately scheduled an event on September 5 in Delhi and on September 8 in Mumbai, where it is expected to launch the anticipated device along with Moto X successor, rumoured Moto X+1.
Affiliate links may be automatically generated - see our ethics statement for details.
Comments