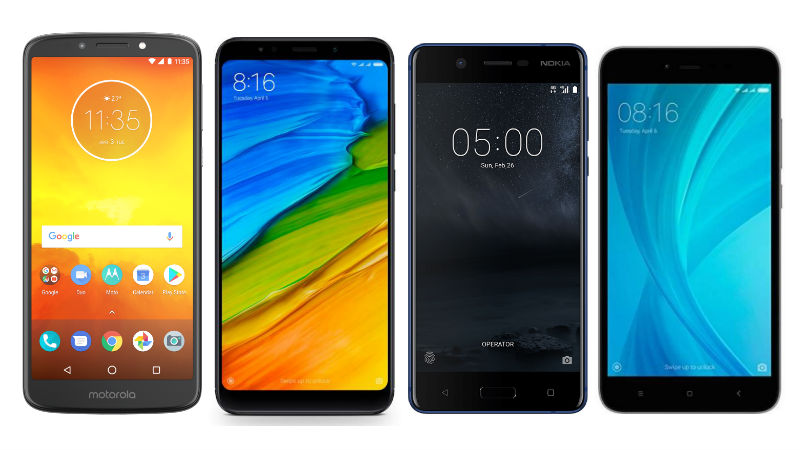 Motorola has finally taken wraps off its latest Moto E5 series of smartphones. Along with the Moto G6 series, the Lenovo-owned company unveiled the Moto E5, Moto E5 Plus, and Moto E5 Play. While the lineup is more about budget pricing and less about raw specifications, the Moto E5's features are positioned right in the middle of the other two handsets. The Moto E5 is expected to be released in the next few months, and the key features include Android 8.0 Oreo, fingerprint scanner, water-repellent coating, LED flash for selfie camera, and 18:9 display.

The Moto E5 will launch in India later this year as an entry-level smartphone, a segment that is already flooded with options from major OEMs like Xiaomi and Nokia-licensee HMD Global. Xiaomi's two smartphones - Redmi Y1 and Redmi Note 5 - are two great options in the segment. While the Redmi Note 5 comes with a 5.99-inch display and 4GB of RAM, the Redmi Y1 a youth-centric selfie smartphone. Nokia 5 is also a decent offering from the Finnish company, and it comes in 2GB and 3GB variants.

We take a look at the Moto E5 price and specifications and compare them with those of the Redmi Note 5, Nokia 5, and Redmi Y1 to help you choose the best smartphone.

The Moto E5 will be rolled out over the coming months in various countries in the Asia Pacific, Europe, and Latin America with a starting MSRP of EUR 149 (roughly Rs. 12,100). Notably, the release date and prices of the Moto E5 lineup with respect to India has not been disclosed yet.

Moto E5 comes in dual-SIM and single-SIM (Nano) variants and runs stock Android 8.0 Oreo. The smartphone sports a 5.7-inch HD+ (720x1440 pixels) display with an 18:9 aspect ratio. It is powered by a 1.4GHz quad-core Snapdragon 425 SoC paired with 2GB of RAM. In terms of optics, the Moto E5 has a 13-megapixel rear camera with f/2.0 aperture and LED flash and on the front, is a 5-megapixel selfie camera. Also, the smartphone is equipped with 16GB of inbuilt storage, and microSD support up to 128GB.

Connectivity options in the Moto E5 include 4G LTE, Wi-Fi, Bluetooth 4.2 LE, NFC (in single SIM variant only), and 3.5mm audio jack. Sensors onboard are an accelerometer, ambient light sensor, and proximity sensor. It is fuelled by a 4000mAh battery. The smartphone measures 154.4x72.2x8.95mm, weighs 174 grams and will be available in Flash Gray and Fine Gold colour models.

Meanwhile, the dual-SIM (Nano) Xiaomi Redmi Note 5 runs Android 7.0. The smartphone comes with a 5.99-inch touchscreen display with a resolution of 1080x2160 pixels. It is powered by 2GHz octa-core Qualcomm Snapdragon 625 processor, coupled with 4GB of RAM. As far as the cameras are concerned, the Xiaomi Redmi Note 5 packs a 12-megapixel primary camera on the rear and a 5-megapixel front shooter for selfies. The phone is equipped with 64GB of inbuilt storage that can be expanded via microSD card.

Connectivity options on the Xiaomi Redmi Note 5 include 4G VoLTE, Wi-Fi 802.11 b/g/n, Bluetooth, 3.5mm headphone jack, and Micro-USB. It is powered by a 4000mAh battery, with 5V/2A fast charging. The power adapter it ships with has been designed for India, said to withstand power surges common in the country. It measures 158.5x75.45x8.05mm and weighs 180 grams. Sensors on the Redmi Note 5 include an accelerometer, ambient light sensor, gyroscope, magnetometer, and proximity sensor. It is powered by a 4000mAh non-removable battery.

When it comes to the Nokia 5, the dual-SIM (Nano) smartphone runs Android 7.1.1 Nougat and is upgradable to Android Oreo. It sports a 5.2-inch HD (720x1280 pixels) IPS LCD panel with 2.5D Corning Gorilla Glass protection. Further, it is powered by an octa-core Qualcomm Snapdragon 430 SoC, coupled with 2GB or 3GB of RAM. The smartphone sports a 13-megapixel rear camera sensor with f/2.0 aperture, PDAF lens and dual-tone flash. At the front, it has an 8-megapixel autofocus camera sensor with an f/2.0 aperture, 84-degree field-of-view lens. The smartphone has 16GB inbuilt storage that is expandable via microSD card (up to 128GB).

Connectivity options on the Nokia 5 include 4G VoLTE, Wi-Fi 802.11 a/b/g/n, Bluetooth v4.1, FM radio with RDS, GPS/ A-GPS, Micro-USB with OTG, and a 3.5mm audio jack. Sensors on board include accelerometer, ambient light sensor, digital compass, gyroscope, and proximity sensor. It is powered by a 3000mAh battery that's non-removable, and measures 149.7x72.5x8.05mm excluding the camera bump - which takes it up to 8.55mm.

Finally, the dual-SIM (Nano) Redmi Y1 runs the MIUI 9 software version, based on Android Nougat. It sports a 5.5-inch HD (720x1280 pixels) display, and is powered by the octa-core Snapdragon 435 SoC, coupled with 3GB of RAM. The smartphone bears a 13-megapixel camera with PDAF and dual-LED flash.

There is 32GB of inbuilt storage on the Xiaomi Redmi Y1, which is expandable via microSD card (up to 128GB) with its own dedicated card slot. It has standard connectivity options, including 4G VoLTE. The handset is powered by a 3080mAh battery. It weighs 153 grams, and measures 153x76.2x7.7mm.