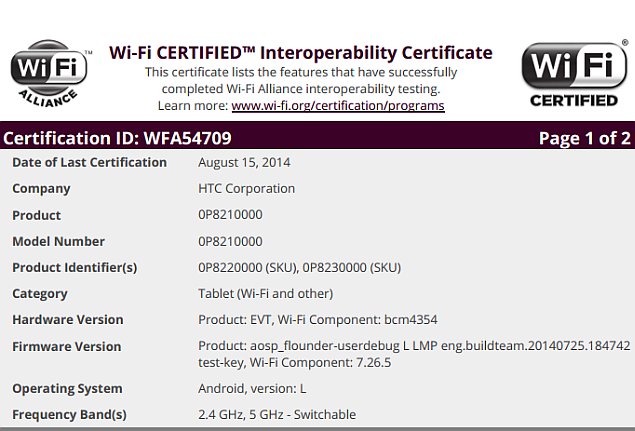 While Google is preparing to introduce its much-awaited Android L OS version by the end of this year, the company has still not disclosed what the 'L' stands for. However, a new report has hinted the Android L will be called Android 5.0 'Lemon Meringue Pie' or LMP.

Android Police reports that like Google's previous release, which was internally codenamed KLP (Key Lime Pie) and was mentioned in several documents, LMP has been also spotted mentioned in several Android-related documents. While LMP could have other expansions, Lemon Meringue Pie seems a good fit for a traditional Android dessert name.

Notably, the anticipated HTC Volantis tablet, which is said to be the next 9-inch Nexus tablet, features Android LMP listed on its Wi-Fi certification documents (see above). The string 'LMP' could be found on the device's firmware description in the document. The firmware version states - Product: aosp_flounder-userdebug L LMP eng.buildteam.20140725.184742test-key, Wi-Fi Component: 7.26.5. Notably, the operating system in the document is separately stated to be Android L.

The website also found LMP mentioned at several places when doing a quick search in the Android Open Source Project source files (see above). However, the convincing part is that an extract from the Android SDK describes the preview Android L builds for the Nexus 5 and Nexus 7 as 'lmp-preview-release' a number of times. The users can access the document at extras/android/m2repository/com/android/support/cardview-v7/21.0.0-rc1/cardview-v7-21.0.0-rc1.aar if they have it installed.

While one can also not ignore the number of mentions of Android LMP, expected to be 'Lemon Meringue Pie', in several Android-related documents, it is to be noted that the previous version was changed from KLP (internally codenamed Key Lime Pie) to KitKat when it was finally announced officially. Thus, Android LMP might also be changed by the time it reaches users - and reports speculate that it may once again be a branded name.

Earlier this month, Google released the updated Android L system factory images for the Nexus 5 smartphone and Nexus 7 (2013) tablet. The new release bumps-up the version from LPV79 (released in June) to LPV81C.