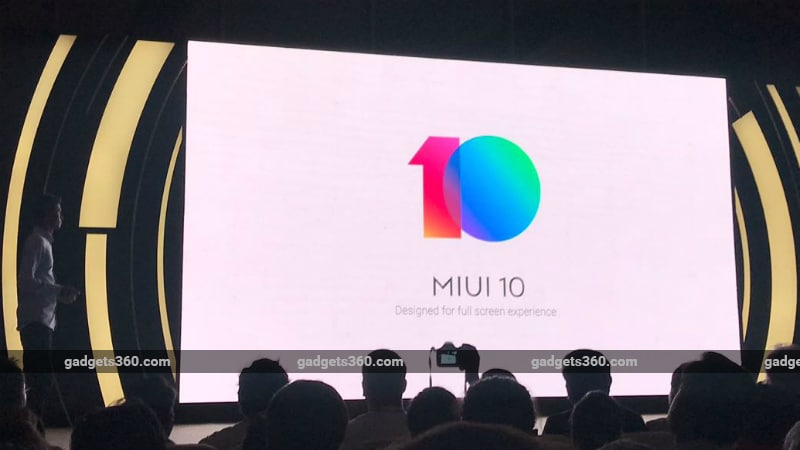 Xiaomi on Thursday launched the MIUI 10 Global ROM alongside bringing the Redmi Y2 in India. To recall, MIUI 10 was unveiled in China last month, and at the time, China Developer ROM details were released. The custom Android Oreo-based MIUI Global ROM comes preloaded with the AI Portrait feature that is designed to enhance still photography. The new operating system is touted to deliver a faster experience over the previous MIUI version. There are also new full screen display gestures, similar to the ones debuted on the iPhone X last year, as well as a new Recents view. The Chinese company has also bundled new system sound and ambient noises. Specifically for Indian users, the latest MIUI comes preloaded with new versions of Mi Music, Mi Video, enhanced Browser, and a new quick menu tab for business and service messages. The MIUI 10 Global ROM Beta will be rolled out starting the middle of June for select Xiaomi handsets, while its stable builds will arrive sometime in September.

Xiaomi has designed the MIUI 10 Global ROM by keeping four major elements in mind, namely speed, design, sound, and the AI Portrait feature. The new ROM includes lock-free critical path and codependent prioritising as the two system-level optimisations. "This ensures that the overall smoothness of MIUI has increased over 10 percent of the predecessor version," said Sudeep Sahu, Product Manager, Xiaomi India, at the conference.

After performance, MIUI 10 has full screen display gestures that make it a better option for devices with newer aspect ratios and thin-bezel displays. These full screen gestures are available across the custom experience. For instance, users can swipe from bottom to go to the home screen, swipe from the edges to go back to the previous screen, or swipe from the bottom and hold it to go to the Recents view.

"Once you start using gestures on phone - be it on applications and especially the MIUI 10 - you just can't go back," Sahu stated.

Further, Xiaomi has restructured the whole layout and regrouped the items based on their types. There are also new system apps, including Weather and Calendar. Likewise, notifications panel has been revamped to look fine on a full screen device. The default Notes app has also received an option to let users take voice memos.

On the sound part, the MIUI 10 Global ROM includes natural sounds and ambient noises. There is notably a water droplet sound for notifications. While elaborating sound effects, Sahu said that no two notification sounds on MIUI 10 are the same.

Similar to its Chinese counterpart, the MIUI 10 Global ROM also includes the AI Portrait feature that adds a bokeh effect to shots - without requiring a secondary sensor. This is highly useful for devices that come with a single camera setup instead of the ones with a dual camera setup. The feature primarily uses artificial intelligence (AI) based algorithms to identify foreground and blur out the background. Sahu stated during his presentation that the AI Portrait feature will initially come to the front camera of the MIUI 10-based smartphones, though it will power the rear camera setup at a later stage.

For Indian users, the MIUI 10 Global ROM will come with refreshed Mi Music and Mi Video apps. Both apps were launched in the country last month. There is also a new Browser app with a list highlighting some of the Progressive Web Apps (PWAs), including Flipkart Lite, BookMyShow, and MakeMyTrip among others. Further, the camera app of the MIUI 10 doubles up as a Paytm QR code scanner to let users easily make cashless transactions on their Xiaomi handset. There is also a quick menu tab for business and services messages to help users explore more about the business or service with one tap. The menu offers options such as visit a website or dial a phone number on a contextual basis. Moreover, it is claimed to support over 100 services initially.