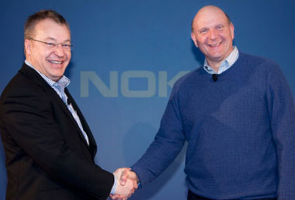 Highlights
How much is Microsoft paying to be on the Nokia platform?

It was earlier reported that it would be millions of dollars. Now, Bloomberg reports that Microsoft will pay Nokia "more than $1 billion to promote and develop Windows based handsets."

Though Microsoft and Nokia have refused to comment, Bloomberg has said that the information comes from two people with knowledge of the arrangement. This agreement will run for five years, Bloomberg quotes its sources a saying. Nokia, on the other hand, will pay Microsoft a fee for each Windows OS used in its devices.

If this latest information is correct, it will benefit both sides financially as well as against competition from the iPhone and Android smartphones, which are currently leading the market.

Nokia, the once market leader, is at number 5 after Android, Apple iOS, Blackberry and Windows Phones. Nokia shares have fallen 26 per cent since the announcement of the deal on February 11, 2011. However, Nokia is still one of the largest global manufacturers and distributors of cell phones in the world. If Symbian could not help Nokia smartphones take off, perhaps the Windows OS will.
Comments