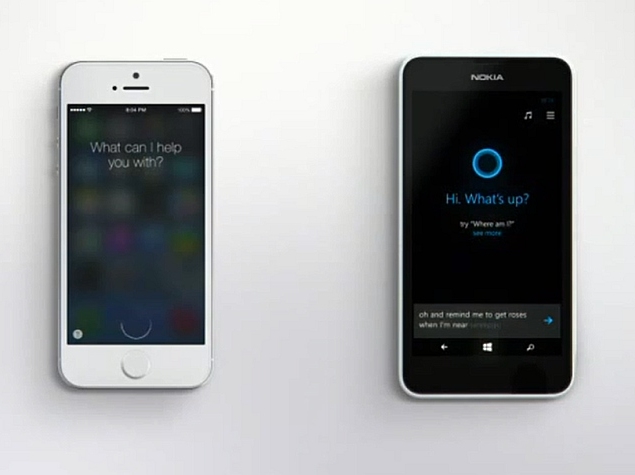 Microsoft on Sunday launched a new commercial that pits its voice-based virtual assistant, Cortana, against Apple's counterpart, Siri. In the showdown, as expected, Cortana wins hands-down, with Siri attributed some rather illogical and obviously fake responses to make Microsoft's point - its offering is better than Apple's.

The video commercial, titled "Siri vs. Cortana - Happy Anniversary", was also posted on Microsoft's Windows Phone channel on YouTube. The video shows Cortana running on the Windows Phone 8.1-based Nokia Lumia 635, and Siri running on an iPhone 5s.

In the commercial, Microsoft has flaunted Cortana's human-like ability to learn and understand natural language commands.

In a series of questions that end with Siri losing the battle, a user starts off by asking Cortana to set a reminder about a specific person instead of a time or location, which Siri admits that it cannot do. The user asks both virtual assistants to remind him to pick 'Roses' whenever near a flower shop, to which Cortana says "Sure, I will remind you", while Siri responds saying it cannot do this either. Finally, just when the user says that "it's going to be a great night"; Cortana takes it as "Time to leave" for the meeting scheduled that night, and presents live traffic information, while Siri finally surrenders by saying, "now that is a smartphone", referring to Cortana and the Lumia 635.

In the meanwhile, further updating the abilities of Cortana, Microsoft has reportedly integrated data from the location-based service Foursquare. Notably, the Redmond giant had invested $15 million in the startup earlier this year in February.

A screenshot posted by a Reddit user, shows Cortana's suggested results for 'places to check out nearby' fetched from Foursquare. While it seems that the update is in a testing phase, it is likely the company might roll it out sometime in its bi-monthly update plan.

Microsoft's Cortana (currently only available in the US) will soon be reaching the UK, and is also expected to be made available in China soon.
Comments