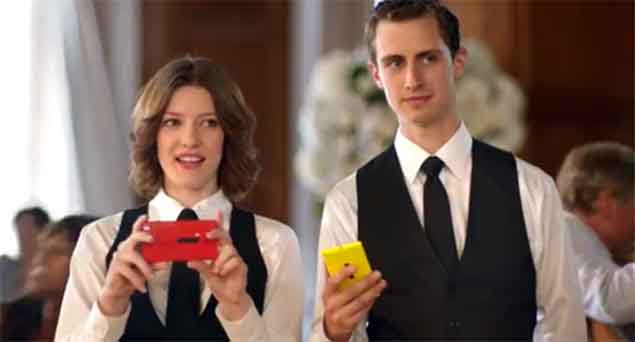 Microsoft has rolled out a new television commercial for Nokia Lumia 920. In this ad, Microsoft seems to be mocking the rivalry between Apple and Samsung to drive home the "Switch to Lumia" message.

The ad opens with a wedding ceremony in progress. As soon as the bride and groom are about to exchange their vows, everybody at the wedding takes out their smartphones and phablets to capture the moment. One of the guests gets up from his seat to click the picture through his Samsung Galaxy Note II phablet.

This tips off an iPhone 5 user who blurts, "Excuse me, would you mind moving your enormous phone?" This triggers a war of words between the Apple and Samsung fans present at the wedding. Soon the mocking turns into a physical fight and there is chaos all around.

In the middle of the fight two waiters are seen clicking pictures of the brawl with their Nokia Lumia 920. The male waiter asks his female colleague, "Do you think that if they knew about the Nokia Lumia, they'd stop fighting all the time?" To which the lady replies, "I don't know, I kind of think, they like fighting". And the message comes across, "Don't fight. Switch."

The idea behind the ad is that Lumia is a far better choice than Apple or Samsung and hence you don't need to argue and just switch.

Though the ad is funny and eye catching but it seems to be more about Apple and Samsung rather than Windows Phone. As a matter of fact, the Nokia Lumia 920 has a far lesser screen time than iPhone or Galaxy devices, so we don't really think that this advertising will be effective in boosting sales for the Nokia Lumia 920 smartphone in the US.

It's noteworthy that this is not the first time that Microsoft has targeted someone through an advertising campaign. In November, Microsoft had launched "Scroogled" campaign through which it tried to warn consumers that they risk getting "scroogled" if they rely on Google's shopping search service.