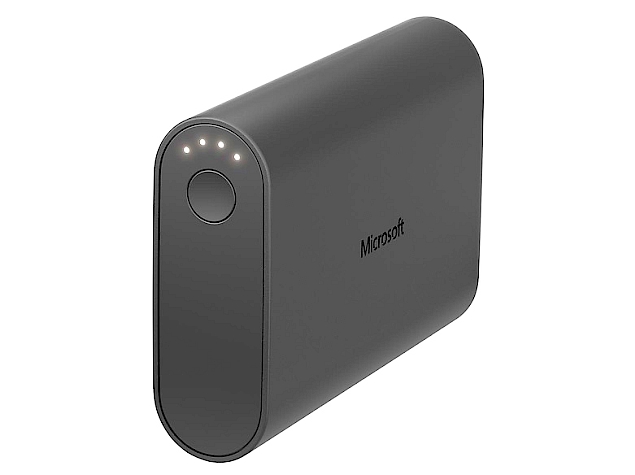 After Xiaomi, OnePlus, and Asus, Microsoft on Wednesday launched a set of three power banks with 5200mAh, 9000mAh, and 12000mAh battery capacities in the accessory market. The Microsoft Portable Dual Chargers will arrive in select regions in the "next few weeks" with an estimated retail price of $35 (roughly Rs. 2,200), $45 (roughly Rs. 2,900) and $55 (roughly Rs. 3,500) respectively.

The Microsoft Portable Dual Chargers sport the same "pocketable" shape like Xiaomi Mi Power Banks but are available in Black colour variant only. While the three portable chargers measure the same 100mm and 25mm in width and thickness respectively, they differ in length and weight based on different battery capacity versions. While the 5200mAh variant weighs 141 grams and is 50mm long, the 9000mAh and 12000mAh versions weigh 215 grams and 275 grams and are 68.5mm and 87mm long, respectively.

"While bigger in capacity and also physical size, these two are still portable and can easily be slipped into your bag, your glovebox, or in your tent while you prepare your smores," said Adam Fraser on the Lumia Conversation blog post.

As the name suggests, the power banks house two USB ports, letting users charge two devices at a time and are said to hold their charge for months at a time.The Microsoft Portable Dual Chargers have 5V - 1.5A input and offer 5V - 2.1A output. Furthermore, in case users need to charge both the handset and the portable charger simultaneously, they can make use of the 'daisy-chain' feature, in which they would need to plugin the power bank to a source and then the handset with the power bank.

Microsoft claims the power banks can also charge the smartphones and tablets as quickly as the company's AC-60 wall charger accessory. Like most of the other power banks in the market, the Microsoft Portable Dual Chargers feature four LED lights for indicating the power left in the device.The company has also announced a competition to win the power bank, for which more details are available on the blog post.