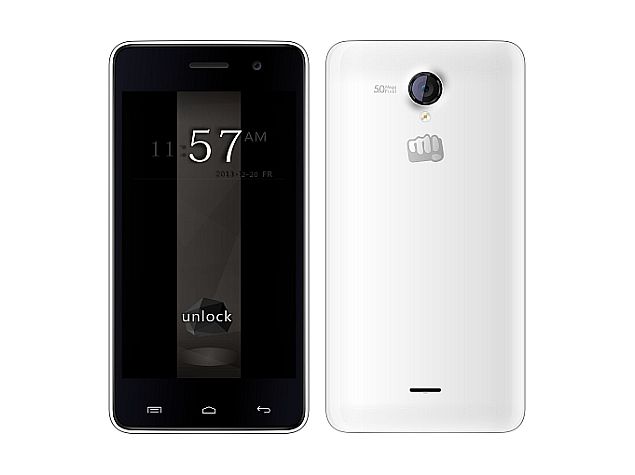 Micromax has launched its first Android 4.4.2 KitKat-based smartphone called Unite 2. Priced at Rs. 6,999, the Micromax Unite 2 will be available from Thursday and is touted to feature support for 20 regional languages (as well as English) with its Reverie Multilingual Pack. The smartphone is not currently listed on the company's website.

Interestingly, the Micromax Unite 2 carries the same price tag as the Moto E.

The Micromax Unite 2 smartphone offers dual-SIM support, and features a 4.7-inch Bright Graph IPS display with a 480x800 pixel resolution. An unspecified quad-core processor powers the device, clocked at 1.3GHz, along with 1GB of RAM. Notably, the smartphone is first from the company to ship with Android 4.4.2 KitKat out-of-the-box, and Micromax is promising further upgrades via OTA.

The Unite 2 smartphone by Micromax sports a 5-megapixel autofocus rear camera with LED flash, while there is a 2-megapixel fixed focus front-facing camera also onboard. The handset comes with 4GB of inbuilt storage, and can be expanded to an additional 32GB via microSD card.

The Micromax Unite 2 supports 3G, Bluetooth, Wi-Fi, and GPS under its wireless connectivity options. It is backed by a 2000mAh battery. The smartphone is available in Grey, Green, Red and White colour variants.

"India is a diverse country and language at times can act as a barrier for people to seamlessly communicate on their phones. Therefore, we firmly believe that support for local languages on phones will perhaps be the next big driver for day to day phone transactions, internet usage and online content consumption in India given that most of the population does not use English as their primary language," stated Shubhodip Pal, CMO, Micromax.

"With the launch of the Micromax Unite 2, our aim is to enable local customization to serve the unique needs of Indian consumers across multiple markets. We aim to create a powerful medium for our consumers to interact, engage, entertain and connect in their preferred language to remove any barrier for technology adoption for the masses in the country," he added.

Lenovo Hires Ex-Nokia and Huawei Executive Colin Giles as VP of Mobile
Sony Should Have Acted Sooner, But Will Return to Profit in 2015: CEO