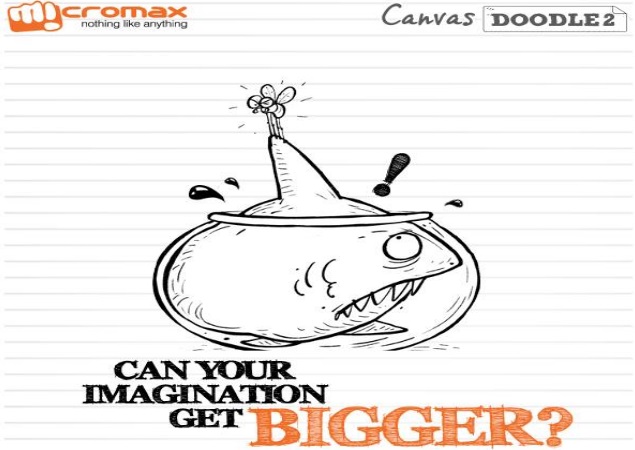 Micromax's upcoming Canvas Doodle 2 smartphone will sport a large screen and will also feature a stylus, going by the phone's teaser posted by Micromax on its Facebook page.

A post from Micromax's official Facebook page displays an illustration with a tidbit of the promotional copy for the Canvas Doodle 2: "Draw, Depict or Doodle and let your thoughts come to life on a bigger Canvas. Canvas Doodle 2 - Coming Soon!"

The illustration comes with the tagline, 'Can your imagination get bigger?' and hints that the device may boast of a stylus similar to its predecessor, but it's not clear if it will come with dedicated apps for use with a stylus to jot down notes or for doodling. Nothing else is known about the Micromax Canvas Doodle 2 at this point in time.

The original Micromax Canvas Doodle featured a 5.3-inch display so we can expect its successor to sport an even bigger display.

The Canvas Doodle A111 was launched back in May and was priced at Rs. 12,999. It is powered by a 1.2GHz quad-core Qualcomm MSM8225Q processor and has 512MB of RAM. It has 4GB internal storage out of which 1.2GB is user-accessible. The dual-SIM dual-GSM (2G+3G) smartphone sports a 5.3-inch capacitive touch screen with a resolution of 540x960 pixels. The company also bundled a stylus. The phone runs Android 4.1.2 Jelly Bean. The Canvas Doodle smartphone sports an 8-megapixel rear camera and a VGA front facing camera. The phone comes with a 2100mAh battery.

Moreover, another source recently claimed that Micromax had plans to showcase its next flagship smartphone which will reportedly be dubbed as A240 and will sport a 5.7-inch 720p HD display. The report claimed that the announcement may come next week.