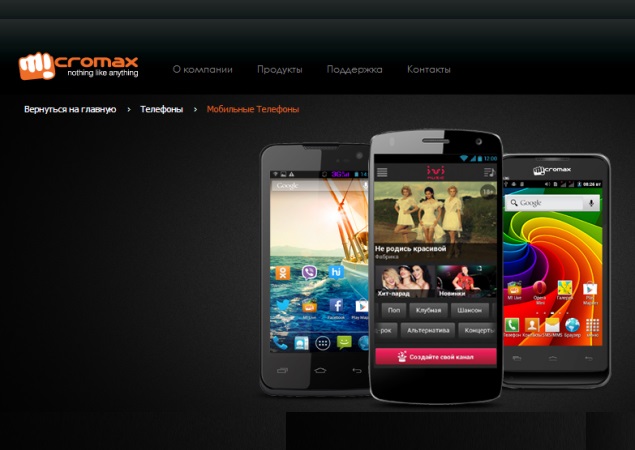 Micromax has announced the launch of its Russia operations in partnership with VVP Group - one of the leading distribution companies in the country. The popular domestic handset maker has announced that it will be launching 14 Bolt and Canvas series smartphones in the initial phase.

The company said it is also targeting to be among the top four brands by the end of 2014 in Russia. Micromax claims that its service infrastructure across Russia is ready, and that it plans to have more than 60 operational service centres by the end of January.

Micromax has also rolled out two smartphones, the Canvas Beat and Canvas Social for the Russian market. Both the smartphones are now listed on Micromax's Russian site.

Notably, the Micromax Canvas Social (A94) is noticeably a variant of the Micromax MAd (A94) smartphone, which was recently launched in India, featuring identical specifications. However, it's worth pointing out that the Canvas Social for Russian market does not feature Micromax Advertising Application (MAd) app.

On the other hand, the Canvas Beat (A114R) can also be considered to be a variant of an already launched Indian smartphone, the Canvas 2.2 (A114). We presume the R prefix is for the Russian market, however, the two phones don't share the same processor and battery specifications. The Canvas Beat (A114R) runs Android 4.2 Jelly Bean and is a dual-SIM phablet (GSM+GSM). It features a 5-inch qHD (540x960 pixels) IPS display, and is powered by a 1.2GHz quad-core Broadcom BCM23550 processor along with 1GB of RAM.

The Canvas Beat sports an 8-megapixel autofocus rear camera accompanied by flash, and also includes a 2-megapixel front-facing camera. The smartphone comes with 4GB inbuilt storage, with no word on expandable storage (the Canvas 2.2 however, did feature the functionality - up to 32GB via microSD card). The Micromax Canvas Beat also packs a 1900mAh battery, as compared to the Canvas 2.2's 2000mAh one.

Commenting on the launch, Mr. Rahul Sharma, co-founder, Micromax said, "As we look to take Micromax to key international markets, we are excited to announce our foray into the Russian mobile handset market which has immense potential not only for smartphones and features phones, but also for innovative tablets and data products. Our initial focus in the Russian market is to replicate the success witnessed in our other markets in the last couple of years."

An earlier report in November last year had suggested that Micromax will be assembling phones in India and would be targeting Russian market.

Sharma further added, "We see a growing trend of data consumption through mobile devices in Russia, and we would be initiating partnerships with the leading operators in the region to aim at efficient data consumption on our devices in the coming year".