Micromax In 1b to Go on First Sale in India on December 10 via Flipkart, Company Site: Price, Specifications 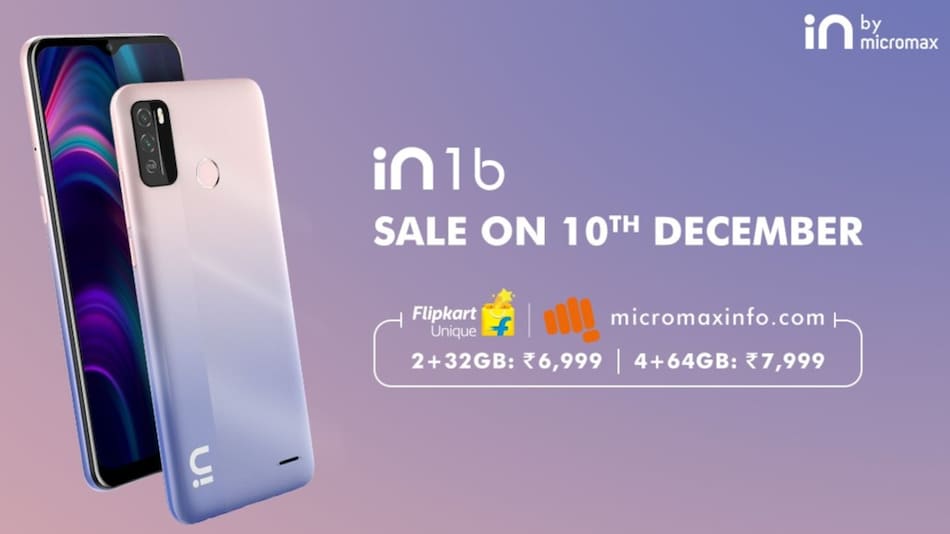 Micromax In 1b is set to go on its first sale in India starting 12pm (noon) on December 10. The smartphone will be available for purchase via Flipkart and the Micromax website, as announced by the company. Micromax In 1b was launched in the country in November and was scheduled to go on sale on November 26. However, it was postponed last minute due to a logistics issue. Key features of the smartphone include an octa-core MediaTek Helio G35 SoC and a 5,000mAh battery.

The company announced the new sale date via Twitter. Micromax In 1b was launched in India last month, alongside Micromax In Note 1. Both the phones come under the company's newly launched ‘In' series that is meant to counter Chinese brands.

Micromax In 1b price in India, availability

Micromax In 1b is priced at Rs. 6,999 in India for the 2GB + 32GB storage variant and at Rs. 7,999 for the 4GB + 64GB storage option. Micromax In 1b will be available for purchase starting 12pm (noon) on December 10, via Flipkart and the Micromax website. The phone is offered in Blue, Green, and Purple colour options.

Sale offers for Micromax In 1b on Flipkart include five percent unlimited cashback on Flipkart Axis Bank credit cards, 10 percent off with Axis Bank Buzz credit cards, and a Flipkart gift card worth Rs. 2,000 on every 1,000th transaction with a new Visa debit or credit card. No-cost EMIs for the phone start at Rs. 889 per month.

Micromax In 1b specifications, features

Micromax In 1b features a 6.52-inch HD+ display with a waterdrop-style notch. The dual-SIM (Nano) phone runs on Android 10 (Go edition) with a stock experience. Under the hood, it has an octa-core MediaTek Helio G35 SoC, paired with up to 4GB of RAM. It has up to 64GB of internal storage, expandable via microSD card (up to 128GB).

For photography, Micromax In 1b has a dual rear camera setup that features a 13-megapixel primary sensor with an f/1.8 lens and a 2-megapixel depth sensor, along with an LED flash. For selfies and video chats, the smartphone comes with an 8-megapixel snapper at the front.

Micromax In 1b packs a 5,000mAh battery that supports reverse charging and 10W fast charging. Connectivity options on the smartphone include 4G VoLTE, Wi-Fi, Bluetooth 5.0, GPS/ A-GPS, and a Micro-USB port. It has a 3.5mm headphone jack for wired audio connectivity. The Micromax phone weighs 188 grams.