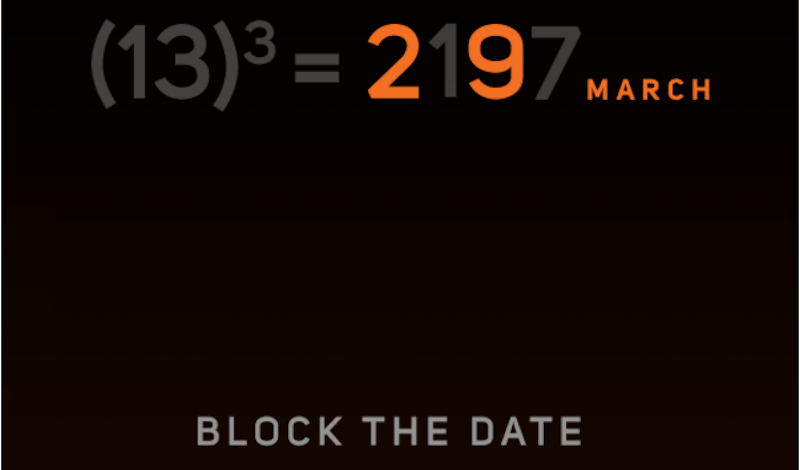 Micromax on Tuesday dropped a teaser for an upcoming event. The cryptic teaser simply shows a mathematical calculation for 13-cubed, which results in 2197. Shuffle the numbers and it reveals a possible date for the upcoming event, which is March 29, 2017. The company has largely been hush about what it plans to unveil at the event, but some past teasers suggest a new smartphone will likely be announced. Interestingly, the launch date also coincides with Samsung's Galaxy S8 launch.

The company has over the past few weeks sent out teasers of what one can expect at the coming event. A tweet last week showed a GIF image wherein two circles were lit up with a tagline 'Cannot Overlook'. This could possibly hint at a dual rear-camera smartphone. This is further substantiated by a leak on Weibo last month that showed live images of an unknown Micromax smartphone. Notably, the leaked smartphone features dual rear camera with a flash module in between, apart from a curved metallic build. If this hold true, the smartphone will be Micromax's first smartphone with dual rear camera.

The 13-cubed teaser could also hint that the smartphone will sport two 13-megapixel rear cameras, and one 13-megapixel front camera.

Earlier this month, Micromax tweeted a couple of jumbled word puzzles for fans to guess some of the features that can be expected with the upcoming smartphone. Based on the teasers, the smartphone will likely feature support for 4G VoLTE, Google Duo video calling, and 12 regional languages, to name a few.

Micromax in the past year has lost out to Chinese manufacturers like Xiaomi, Vivo and Oppo who have dominated the Indian smartphone market. For the company to make a comeback, it will look to change its game and introduce some premium features to its budget to mid-range lineup, and perhaps a dual rear camera setup is one way to do that.

With just a few days to go before the official unveiling, we can expect the company to drop a few more teasers along the way. We'll know exactly what Micromax has in store on March 29 2017.