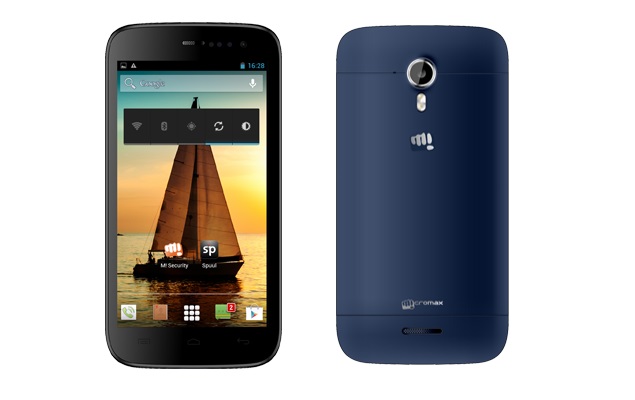 After being spotted at an online retailer recently, Micromax's new mid-range smartphone, the Canvas Magnus is now officially available via the company's site with a price tag of Rs. 14,999.

The Android 4.2 Jelly Bean-based Micromax Canvas Magnus comes with a 5-inch IPS display with a 720x1280 pixels resolution. It is powered by a 1.5GHz quad-core processor (unspecified chipset) along with 1GB of RAM. The Canvas Magnus is a dual-SIM device with support for GSM+GSM.

The Canvas Magnus features a 12-megapixel rear camera with LED flash and full-HD video recording support, apart from a 2-megapixel front-facing camera, and a 2000mAh battery. Connectivity options on the device include Wi-Fi, Bluetooth, GPS/ AGPS, and 3G. It comes with 4GB of inbuilt storage which is further expandable up to 32GB via microSD card.

In October, Micromax unveiled its first smartphone with full-HD display, the Canvas Turbo at Rs. 19,990. It features a 5-inch full-HD CGS (Continuous Grain Silicon) IPS display with 1080x1920 pixels resolution. It is powered by a 1.5GHz quad-core MediaTek 6589T (Turbo) processor along with 2GB of RAM. The smartphone runs Android 4.2.1 Jelly Bean and comes with FOTA support.

The Canvas Turbo features 16GB of inbuilt storage and does not support expandable storage. The Canvas Turbo sports 13-megapixel rear autofocus camera and also houses a 5-megapixel front-facing camera. The company mentions in a press note that the Canvas Turbo's camera includes a number of features like Panorama, Cinemagraph and Object Eraser.