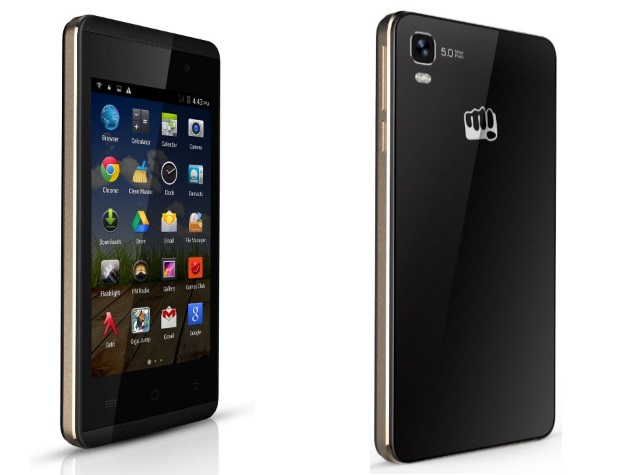 The Micromax Canvas Fire (A093) is now available at Rs. 6,999 via an e-commerce website, but has yet to be officially announced by the company. In addition, the Canvas Beat, which initially launched in Russia in January, has been listed on the company's India site.

An established retailer on Wednesday had claimed that the new Android 4.4 KitKat-based Canvas Fire will be announced at a price point of Rs. 6,299. It's worth mentioning that since the Canvas Fire has been listed on a third-party online store, one cannot be certain if this will be the official launch price when the Canvas Fire is unveiled in India.

The Micromax Canvas Fire features a 4-inch WVGA (480x800 pixels) TFT display. It is powered by a 1.3GHz quad-core processor clubbed with 512MB of RAM. It comes with 4GB of built-in storage, which can be expanded up to 32GB with the help of microSD card.

It is a dual-SIM (GSM+GSM) device with dual standby support. There is a 5-megapixel rear camera and a 0.3-megapixel front camera also on board. Connectivity options include Wi-Fi, Bluetooth, A-GPS, GPRS/EDGE, and 3G. The smartphone is backed by a 1750mAh battery.

The Micromax Canvas Beat, on the other hand, went on sale via a third party retailer in June and has now been listed on the company's site, confirming that we might see an official India launch soon.

However, it's worth noting that the handset still carries the model number A114R in the official listing. For those unaware, the Canvas Beat (A114R) can be considered to be a variant of an already available Indian smartphone, the Canvas 2.2 (A114). It had earlier appeared as if the R prefix was for the Russian market, however, the two phones don't share the same processor and battery specifications.

The Canvas Beat sports an 8-megapixel autofocus rear camera accompanied by LED flash, and also includes a 2-megapixel front-facing camera. The smartphone comes with 4GB inbuilt storage, with expandable storage up to 32GB supported via microSD card. The Micromax Canvas Beat also packs a 1900mAh battery, as compared to the Canvas 2.2's 2000mAh one.