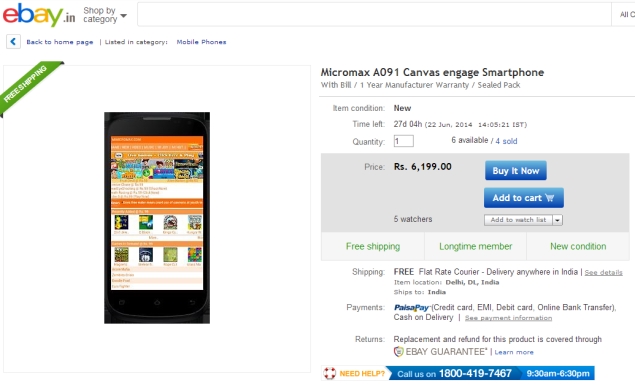 Micromax launched its first smartphone running Android 4.4 KitKat last week, the Unite 2. The company has now made available its second Android KitKat smartphone, the Canvas Engage, which can be purchased online at Rs. 6,199.

The Micromax Canvas Engage notably has not yet been listed on the company's site, and there is no word when the smartphone will be officially launched. It's worth noting that if Micromax launches the Canvas Engage at Rs. 6,199, the smartphone will become the most affordable smartphone running Android KitKat out-of-the-box, leaving behind Moto E and Micromax Unite 2, both priced at Rs. 6,999. The Unite 2's other USP is its support for 20 regional languages (as well as English) with its Reverie Multilingual Pack.

(Also see: How the X-Men are Helping Micromax Go Global)

The Canvas Engage runs Android 4.4.2 KitKat out-of-the-box, according to the eBay listing. It offers dual-SIM (GSM+GSM) support with dual standby. It features a 4-inch IPS display with WVGA (480x800 pixels) resolution. A quad-core (unspecified) processor powers the smartphone, clocked at 1.2GHz, coupled with 512MB of RAM. The Canvas Engage sports a 5-megapixel rear camera, while there is a 0.3-megapixel front-facing camera also onboard.

The smartphone comes with 4GB of inbuilt storage, and can be expanded up to 32GB via microSD card. It supports Bluetooth, Wi-Fi, GPS/ A-GPS, GPRS/ EDGE and 3G connectivity options. The Canvas Engage is backed by a 1500mAh battery, which according to the online retailer can deliver up to 5.5 hours of talk time and 200 hours of standby time on 2G network.