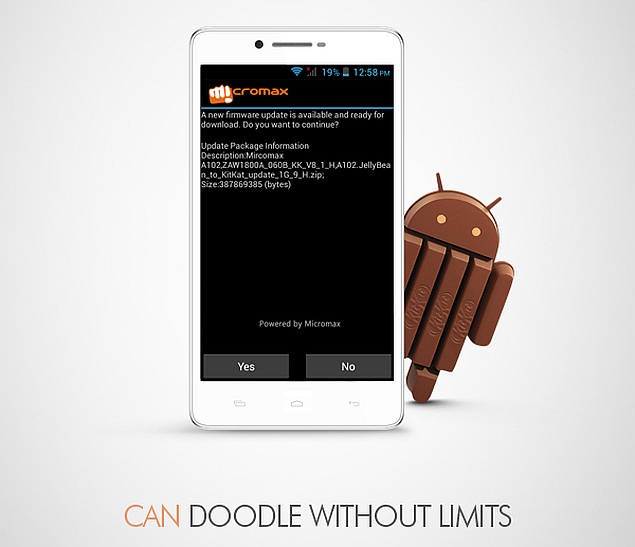 Micromax has started rolling out the Android 4.4.2 KitKat update for the Canvas Doodle 3 over-the-air in India. This is the second handset by Micromax this month to receive the KitKat update, after the Canvas Knight.

Micromax announced the update via a post on its Facebook page, saying, "CAN Doodle on Android Kitkat! All Canvas Doodle 3 users on Android Jelly Bean can now upgrade to Kitkat OS through FOTA! Simply reboot your phone, receive a notification and follow the steps! Wi-Fi connectivity recommended."

Users would have to reboot their Micromax Canvas Doodle 3 handsets before they receive the OS update notification, and have to follow the outlined steps thereafter. The Android 4.4.2 KitKat update is sized around 387MB.

Xolo, one of the rivals of Micromax, on Tuesday announced the beta release of Android 4.4 KitKat for its flagship smartphone -the Xolo Q3000 (Review). The company also said that it will soon release KitKat updates for the Xolo A500 Club, A550s IPS, A600, Q900s and Q1200 (Review | Pictures) smartphones, but didn't mention any time-frame for the roll-out.