Micromax Canvas 4 is bearing the brunt of heightened expectations 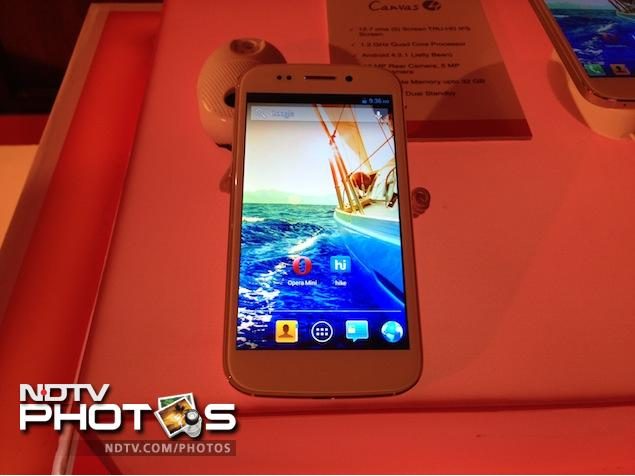 Micromax has come a long way already in its relatively short, yet incredibly successful journey. The company first came to the limelight selling dual-SIM feature phones, sensing a gap in the market that was ruled at the time by single-SIM offerings from Nokia. Micromax was perhaps the first company to realise India's thirst for dual-SIM phones, and positioned itself to service this demand at prices that undercut established players by a substantial margin.

By the time Nokia began to fight back with dual-SIM feature phones of its own, Micromax was the dominant player in the segment, and already eyeing its next move. The rise of Android and an entire ecosystem of manufacturers that was getting setup in China around Google's operating system, gave the company the ideal platform to chase its next big opportunity - budget smartphones that ran Android.

Months after Nokia made its move into the dual-SIM feature phone segment, Micromax launched its first Android-based smartphone, the Micromax A60. Even as the company launched various other Android smartphones, it struggled to shed the tag of 'cheap Chinese imports' tag for a very long time. This made the company realise that if it wanted to take on the big boys of the smartphone world, marketing was as important as the products themselves. Enter the Canvas series.

With the launch of its Canvas series, Micromax tried to position itself as an 'aspirational' brand with European models and foreign locales driving home the point that it was 'cool' to have a Micromax phone. Of course, the company stepped up its game on the product side as well, first, with the Canvas 2, and then, the phone that signalled to everyone that Micromax had well and truly arrived, the Canvas HD.

Micromax Canvas HD received universally positive reviews from the press as well as end users for being a great value-for-money offering, undercutting the sales of Samsung's big bet for the mid-range segment, the Galaxy Grand. With reports of the Canvas HD being sold at a 'premium' across the country, helped no doubt by the limited quantities that were imported, Micromax seemed to have achieved its objective of becoming an aspirational brand, at least for those on a budget.

Riding high on the success of Canvas HD, Micromax started promoting of its new flagship, the Canvas 4. The first promo aired during the high profile India vs. Pakistan clash in the ICC Champions Trophy, indicating how seriously the company now took marketing, and, indeed, how far the company had come from its initial days. The relentless promos, on TV as well as online, only heightened interest, and indeed, expectations, from the Canvas 4.

Micromax Canvas 4, while a decent phone on paper, has definitely failed to live up to people's expectations fuelled largely by Micromax's own marketing efforts. If Micromax had quietly released the Canvas 4, it would've probably been seen as exactly what it is - an incremental upgrade to the Canvas HD. However, after all the pre-launch hype, there was no way the phone could've been received rationally, or delivered everything that people wanted, from a full-HD display to a built-in microwave (okay, one of them is made up).

From someone that could come in from the left field and surprise the big boys, Micromax has become a company whose every move will now be watched and dissected (at least within India, if not elsewhere) similar to what the likes of Samsung and Apple go through on a daily basis. Micromax's next big challenge lies in how it reacts to these heightened expectations.