Micromax A190 With Hexa-Core Processor Leaked in Press Renders 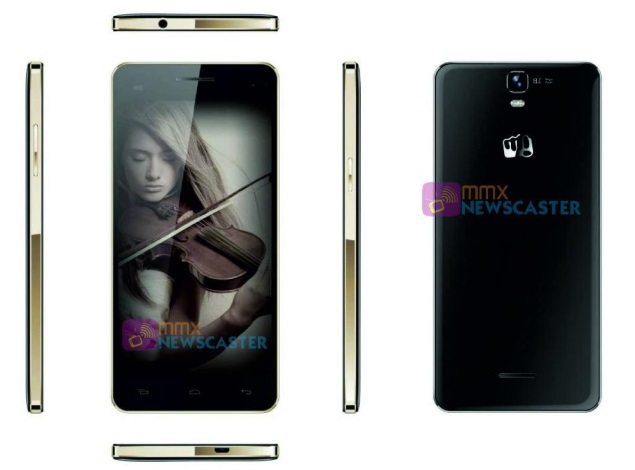 Micromax of late has been aggressively launching smartphones running Android 4.4 KitKat, and a new leak hints that the popular domestic handset maker might unveil another KitKat-based smartphone, the alleged A190, soon.

The leak comes from MMXNewscaster, a reliable source of leaks related to Micromax, who has posted purported specifications and press renders of the alleged Micromax A190 smartphone.

According to the leaked details of the alleged A190, the smartphone will pack a 5-inch HD display; 8-megapixel autofocus rear camera; 2-megapixel front camera; 8GB built-in storage; 1GB of RAM, and 2000mAh battery. Continuing Micromax's KitKat launch spree, the A190 is again said to run Android 4.4.

Notably, the leak suggests that the rumoured Micromax A190 will be backed by a 1.5GHz hexa-core MediaTek (MT6591) processor, which if comes out to be true, will be the first smartphone in the company's line-up to be powered by a hexa-core processor. Karbonn launched the Titanium Hexa, a hexa-core chipset based smartphone earlier this year at Rs. 16,990.

On Monday, Micromax silently added another smartphone to its Bolt series, the Bolt A069, which was also available at an online retailer for Rs. 5,301. The highlight of the device is that it runs Android 4.4.2 KitKat.

Notably, the Micromax Bolt A069 is the company's fifth handset - after the Micromax Canvas Entice, Canvas Engage, Unite 2 (Review | Pictures) and the recently launched Canvas Gold - to run on the latest Android 4.4.2 KitKat OS.