Mi CC9 Pro is all set to launch tomorrow in Chin and it will feature a 108-megapixel main camera. 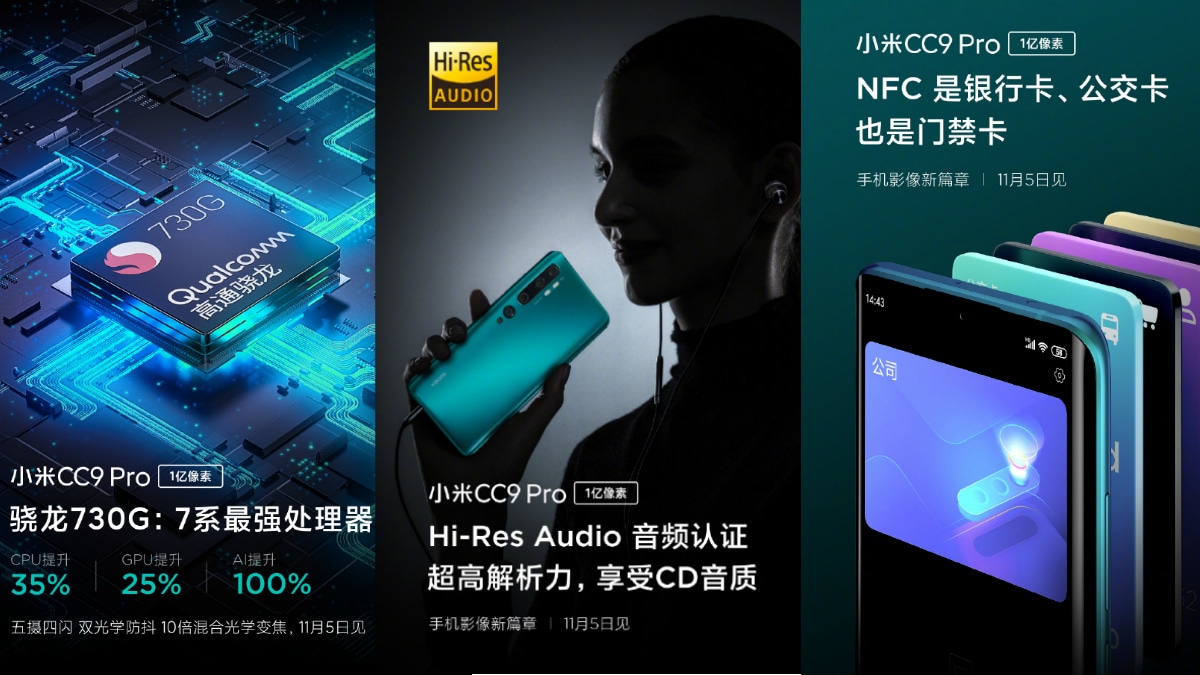 Mi CC9 Pro has already been leaked on several occasions, and Xiaomi has also released a number of the official teasers for the phone. Now, over the weekend, Xiaomi has shared another batch of teasers confirming new details. The Mi CC9 Pro is teased to sport a curved edges display, and pack an in-screen fingerprint sensor, breathing-like LED lights on the sides, and Hi-Res Audio support. Its penta-lens camera details have also been teased in a recent post. Additionally, the phone has been teased to be powered by the Snapdragon 730G processor.

Xiaomi is reiterating on Weibo that the Mi CC9 Pro will be launched on November 5 i.e. tomorrow. The company has a dedicated registration page on Mi.com in China to gauge the interest surrounding the phone. The page is littered with teasers, camera samples, and renders photos of the Mi CC9 Pro. The phone is teased to be powered by the Snapdragon 730G processor, come with NFC support, in-screen fingerprint sensor, and support Hi-Res Audio as well.

As mentioned, the penta-lens camera details have also been teased. The phone is teased to sport an 108-megapixel main camera with f/1.69 aperture and OIS. The top-most camera has a 5-megapixel sensor with 10x hybrid zoom, the second in line is the 12-megaapixel 50mm portrait camera, the third is the 108-megapixel big sensor, the fourth sensor is a 20-megapixel ultra-wide camera, and the fifth is a 2-megapixel macro lens. Camera samples boast of its noiseless zoom, ultra-wide capabilities, and portrait skills as well.

The renders on the registration page show a waterdrop-style notch up front, a curved edged display on the sides, a penta-lens setup at the back, and an in-display fingerprint scanner. It is listed to come in at least two gradient finishes – White and Green.

It has been previously teased to pack a 5,260mAh battery with 30W fast charging support, and a 32-megapixel selfie camera. The launch event is slated to begin at 2pm China Time (11.30am IST) tomorrow.